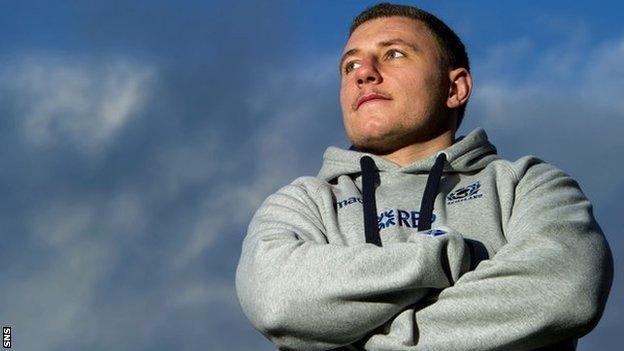 Johnson had delayed the selection of his backs until learning that winger Tommy Seymour had recovered from a leg injury picked up against South Africa.

A late change was forced in the pack after Glasgow Warriors' Tim Swinson aggravated a chest injury in training.

He will be replaced on Saturday with Edinburgh lock Grant Gilchrist.

It will be a fourth cap for Gilchrist as he partners Jim Hamilton in place of Richie Gray.

Gray's 19-year-old brother, Jonny, is given a chance of a second cap within a week as he takes what was Gilchrist's place on the bench to provide cover along with uncapped Kieran Low.

Moray Low retains his place in the front row, along with Ross Ford and Ryan Grant, who was a replacement against the Springboks.

Captain Kelly Brown returns to the starting line-up, the flanker having been rested for and will be joined by Johnnie Beattie and David Denton in the back row.

John Barclay and Alasdair Strokosch are the men making way for Beattie and Brown.

Alasdair Dickinson drops to the bench, where he joins fellow prop Euan Murray, who was missing for religious reasons on Sunday.

The recovery of Seymour, the 25-year-old Glasgow winger who marked his Murrayfield international debut with a brace of tries against Japan, means there is only one change in the back division.

Weir is preferred to Glasgow team-mate Jackson, who was at fault for two of the Springboks' four tries.

Max Evans' experience and ability to cover both centre and wing have won him a place on the bench ahead of uncapped Glasgow centre Mark Bennett.

Greig Laidlaw, who captained Scotland against South Africa in Brown's absence, retains his place at scrum-half ahead of Chris Cusiter.

Johnson, who has had to cope with 11 players picking up injuries against the South Africans, said: "The injuries we've experienced with four of our frontline backs sidelined during this series - Stuart Hogg, Tim Visser, Alex Dunbar and Matt Scott - have meant that we've had to think long and hard about combinations and our bench this weekend.

"A six-day turn-around from one Test match to another is always a challenge and it's one we'll face in our opening two games of the Six Nations Championship too.

"We're clear in what we're trying to do at the moment, which is look at different combinations with a view to intensifying the competition for places in the team.

"That mantra doesn't change, so we adhere to the plan while dealing with injuries and while always being true to the jersey."

Winger Sean Lamont will join Gregor Townsend as the third most-capped Scotland back when he make his 82nd international appearance.

Hamilton will become the 35th Scot to reach the 50-caps mark for his country.