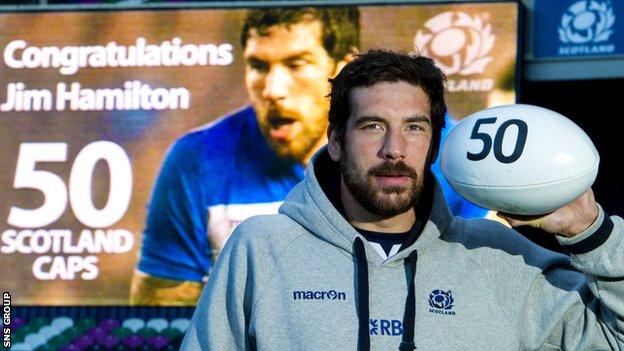 Jim Hamilton aims to mark his 50th Scotland appearance with victory over Australia on Saturday.

"It's a massive honour and a huge milestone for me to look back on - it's one I want to be victorious in," the 31-year-old lock told BBC Scotland.

"Emotionally, it's going to be huge for me.

"But getting up for the game is never an issue. It's about making sure we get the detail right and that is all done in training."

Hamilton made his international bow in 2006 and will be joined by Tim Swinson in the second row, who will be earning his fourth cap, at Murrayfield.

Looking back over his career, the Montpellier star joked: "I don't feel too old yet.

"I played a few games with Nathan [Hines]. I might have played once with Scott Murray, a couple with Jason White maybe, then Richie [Gray] and big Al [Kellock] and the other guys in the mix now.

"For me, it's always been about trying to work as hard as you possibly can and not taking your place for granted.

"Scotland has had some great second row players over the years and that has pushed me on to become better."

Hamilton was not chosen for but returned, alongside Gray, for

Scotland's line-out malfunctioned badly in the first 30 minutes against the Springboks and Hamilton was hugely disappointed by the home side's display.

"We were extremely down," he said. "We genuinely went into the game feeling that, if we got things right, we could go on and win.

"Obviously, we saw a very good South Africa team but it was there for all to see - we just didn't get a foothold in the game.

"We lost five of the first six line-outs and they scored from two driving line-outs.

"With the runaway tries they got, it was fairly disappointing and we have to get over that quickly."