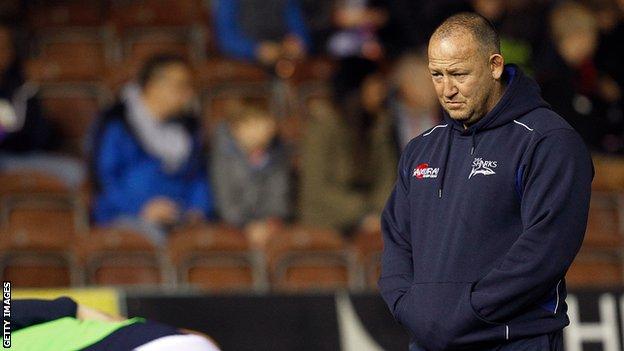 and, with Sale short on options in some positions, there may be more incomings.

"If we took knocks in those areas, we'd have to go into the market and we've got the resources to do that."

Fihaki made his debut in the LV= Cup victory at Harlequins but will not be involved when the Sharks return to Premiership action against Worcester on Friday.

What we have to be is dominant, make a good start and do the non-fancy stuff, and we'll win the game

Instead he will feature for Sale's second-string side, the Jets, on Monday as he adjusts to life in England following his switch from North Harbour in New Zealand.

Diamond's side have made an encouraging start to the campaign, winning three of their first seven league matches and performing well in the pool stages of both cup competitions, while Worcester have lost their first seven Premiership fixtures - the same unwanted record Sale possessed last term.

"It's a similar situation but, in reality, ours was a blip last year," said Diamond.

"Worcester have consistently been down there. They've been relegated and come back up, and they've struggled to get out of the bottom two or three for whatever reason.

"They need to turn the corner and they'll be targeting this game to do that. What we have to be is dominant, make a good start and do the non-fancy stuff, and we'll win the game."