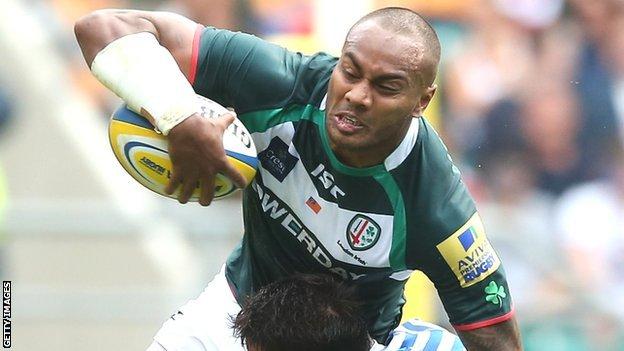 London Irish back Sailosi Tagicakibau admits fighting to reclaim his starting place jolted him back "into gear".

The Samoa international, 31, lost his place on the wing after the opening Premiership loss to Saracens, but has started the last two top-flight games.

"I've been around a long time at Irish and made the shirt pretty much mine," Tagicakibau told BBC Radio Berkshire.

It's great playing alongside him - you feed off him, feed off his energy

"For guys to take that from me really pushed me, got my act into gear and brought the best out of me."

Tagicakibau added: "Competition is healthy for each individual and can only make you a better player.

"It was tough at the start of the season - I was struggling with fitness after not having the best of pre-seasons because of injuries."

The utility back, who has made 155 appearances for the Exiles since 2006, has come up against stiff competition from Alex Lewington,Marland Yarde and Andrew Fenby on the wing, while Fergus Mulchrone has been preferred at centre.

After the Exiles' heavy defeat by Saracens in September, Tagicakibau did not feature again until Exeter visited the Madejski Stadium later the same month. He then missed the trip to Bath, before being placed on the bench against Harlequins in October.

But, after Exiles boss Brian Smith handed Tagicakibau starts against Cavalieri Prato and Lusitanos in the Amlin Challenge Cup, he held onto his place for Premiership losses against Newcastle and Northampton, linking up with Australia international James O'Connor against the Saints to cross for his first try in England's top flight this term.

"In just one game James showed what a classy player he is," Tagicakibau said.

"It's great playing alongside him - you feed off him, feed off his energy and I'll try to get beside him for all his half breaks to try and finish something."