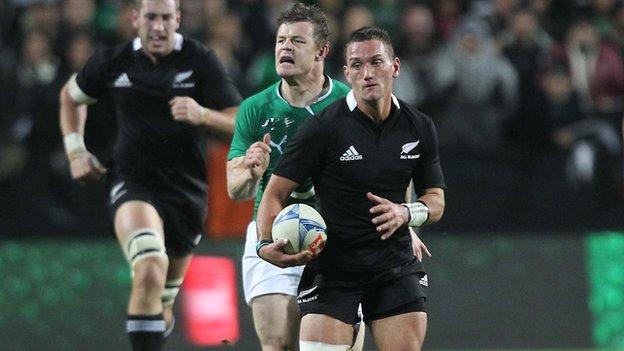 Brian O'Driscoll says Ireland will endure another humiliation against New Zealand if they do not improve hugely from the defeat by Australia.

New Zealand routed the Ireland 60-0 in their last clash 17 months ago and the Irish have never beaten the All Blacks.

"We were poor against Australia and that level isn't acceptable," added the 34-year-old ahead of Sunday's Test.

"If we play anything like that level against the All Blacks there is the potential for a cricket score."

O'Driscoll will equal Ronan O'Gara's 128-cap Ireland appearance record if he overcomes a calf injury niggle to line up in his country's final international of 2013.

The game will also offer O'Driscoll his 13th and last chance to be part of a winning Ireland team against the All Blacks before his retirement at the end of this season.

O'Driscoll knows full well that the world champions will be massive favourites but the veteran centre insists that he believes Ireland can record an historic victory.

"No one will give us a chance but I'm the eternal optimist so I still believe we can beat them.

"If you catch them on an off day and things go right for you, there's always a chance.

"Everyone will write us off but I'm okay with that. We'll treat this game just like any other: as one we can win."

New Zealand will be without star fly-half Dan Carter, who suffered an Achilles tendon injury in last weekend's 30-22 victory over England at Twickenham.

Prop Tony Woodcock has been ruled out too after sustaining a hamstring problem in the triumph over England, New Zealand's 13th consecutive victory.

Should they beat Ireland, the All Blacks will have gone through 2013 with a 100% record.