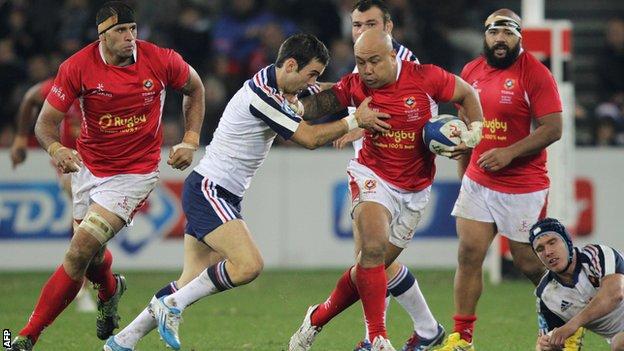 Captain Nili Latu says Shaun Edwards' demands for the referee to protect Wales from Tongan indiscipline are an "insult" to his players.

Prop Sona Taumalolo and French lock Yoann Maestri were sent off for fighting in their 38-18 loss to France and Sea Eagles scrum-half Taniela Moa was sin-binned.

"For me that is an insult," said Latu.

It is important to say it is not going to stop us doing from what we do best, and we will leave it up to the referee

Tonga's clash with France was highlighted for a number of flashpoints, which Edwards said could not be allowed to happen in Cardiff.

"It is vital the referee protects our players," said Edwards.

"I am sure he won't put up with any nonsense, because it is something that has occurred more than once."

Latu said the New Zealand referee should not to be swayed by Edwards' remarks.

"It is a contact sport and anybody who plays rugby, not only Tongans, Samoan and Fijians, bring that physicality into the game," he said.

"It is something that we pride ourselves on. I think sometimes we do let it go to our head, giving away stupid penalties.

"It is important to say it is not going to stop us doing from what we do best, and we will leave it up to the referee.

"He will call what he sees and hopefully it will be a fair match.

"We are looking for an entertaining game and I am sure Wales want the same game as well.

"Hopefully, the referee doesn't dictate the game or the outcome."

Prop Taumalolo will miss Tonga's game against Wales after receiving a four-week ban for punching France lock Maestri during Tonga's defeat in Le Havre on Saturday.

Tonga have yet to win on their autumn tour after losing 19-18 in their opening game to Romania.

However, Latu is confident they can get a win against a new-look Wales side which shows 11 changes from the one that beat Argentina 40-6.

"We have a good young and old squad which we are building for the future.

"In the past, we have beaten Scotland and France, and not by fluke, but when we have had our best players available."

Tonga will field a team showing four changes from the side beaten by France for Friday night's appointment with Wales.

Prop Taumalolo is replaced by Melbourne Rebels' Eddie Aholelei and there are two other switches in the pack with tighthead prop Sila Puafisi and number eight Viliami Ma'afu coming into the side.

Latiume Fosita starts at fly-half as Tonga meet Wales for the first time since they suffered a 27-20 defeat during the 2003 World Cup.

Tonga were beaten 51-7 on their last visit to play Wales at the Millennium Stadium in 2001.