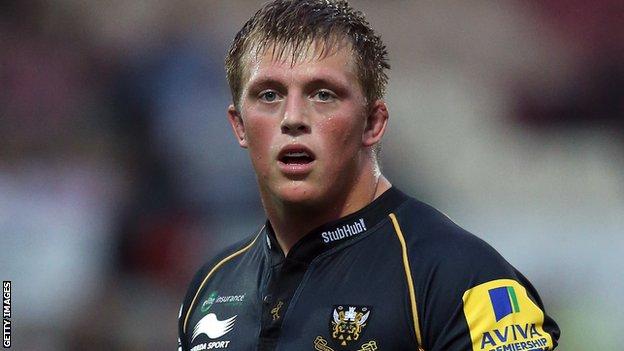 Northampton Saints prop Alex Waller says he is "raring to go" after being rested for the first time in 81 games.

The 23-year-old had featured in every match for Saints since the 2011 Heineken Cup final but missed last weekend's LV= Cup win at London Irish.

He told BBC Radio Northampton: "It was a strange feeling. I felt a bit lost when the boys went to training.

"The body has got a rest, and Alex Corbisiero has a knock, so hopefully I can take the opportunity."

Saints have confirmed he will need a cartilage operation and cannot be sure of when he will return to full fitness.

Alex has quietly but aggressively come up through the ranks.

A lot of credit should go to the Saints' conditioning team and Dorian West. He demolished Matt Stevens and he dealt with Adam Jones as well.

I'm actually disappointed he wasn't in the England squad for the autumn internationals.

"I'm raring to go this week," Waller added, as Saints prepare for home match against Newcastle in the Premiership on Saturday.

"I've been involved for the past three or four years so I do feel part of the team. But when you start every week, it's a bit different, and something I haven't experienced before now."

Having faced challenging duels with international props Dan Cole, Matt Stevens and Adam Jones so far this season, Waller says he is ready for more challenges in the upcoming weeks.

Saints take on Falcons and Worcester in the Premiership as well as facing back-to-back Heineken Cup matches against Leinster.

"I do like the personal challenge," he said. "I can't think 'I've beaten him so I'll be alright against this guy who doesn't have the same credentials'. That's when you start slipping up.

"It is great to get an advantage or a nudge on these international props but it is a learning process for me and a challenge."

And Waller says the signing of Corbisiero has helped his game.

"He is very keen on his detail at the scrum and that's changed the way I look at things. We work very hard in analysis of the scrums and I've learnt a lot from him.

"He is my competition but he's a fantastic bloke and I wish him all the best for a speedy recovery."

Waller dropped out of the match-day squad at London Irish as brother, 21-year-old Ethan, stepped in to make his full debut at loose-head.

Waller says it is more competition for both him and Corbisiero if his brother chooses to specialise in that position.

"I know how hard he's worked, and he knows how hard I've worked, and it's nice to know we've achieved something already," he said.

"He's good enough to move to tight-head but he's doing well at loose-head.

"You don't want to become a jack of all trades, master of none. If he focuses on loose-head, he'll be very good, and that's good for me as it puts pressure on me to improve and in turn on Alex Corbisiero when he comes back."