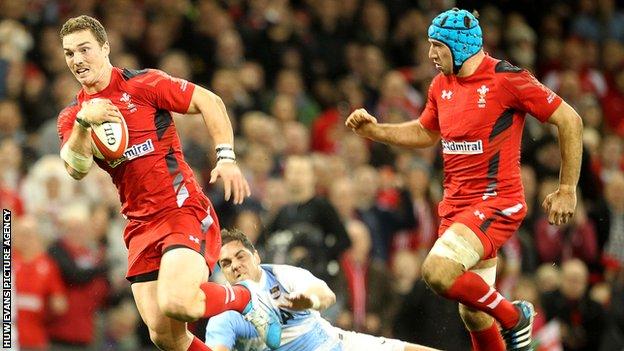 Former Wales and Lions wing JJ Williams has questioned the value of Friday's international against Tonga at the Millennium Stadium.

Head coach Warren Gatland has made 11 changes to the side that beat Argentina 40-6 last Saturday.

Williams, who won 30 caps between 1973 and 1979, insists that the side is not a reflection of the strength in depth in Gatland's squad.

"I don't think there is much depth and real quality," Williams said.

Wales host the Pacific Islanders in the third of four autumn Tests to be held in Cardiff during November.

Did you know: A sprinter who represented Wales in the 1970 Commonwealth Games, JJ Williams played in the Llanelli team that beat the All Blacks in 1972.

Leigh Halfpenny, George North, Rhodri Jones and Justin Tipuric are the only survivors from the win over Argentina, while teenage Newport Gwent Dragons wing Hallam Amos will make his Wales debut.

"I think this match against Tonga on Friday is giving a run out to certain players. I'm not a big fan of it really - capping people who you don't really know," Williams told BBC Wales Sport.

"You're giving caps away and devaluating it a little bit, but that's the way the modern game has gone.

"I read somewhere this week that he's [Gatland] actually awarded 53 caps this season, which is ridiculous.

"Myself, I only had 30 caps. It seems pretty mediocre now because there was only six matches a year then.

"This game on Friday, really it's for money for the Welsh Rugby Union."

Wales will complete the autumn series against Australia on 30 November, a side they last defeated in November 2008.

Williams believes Wales are as good as the Wallabies, but are some way behind World champions New Zealand and South Africa, a team they lost to earlier in November.

"I think we're on a par with Australia at the moment but they're a little behind those two as well. I think we've got to beat them."

The Welsh Rugby Union contends that the policy of major rugby powers playing "Tier Two" nations is a well-established facet of the International Rugby Board's policy of developing the sport worldwide.