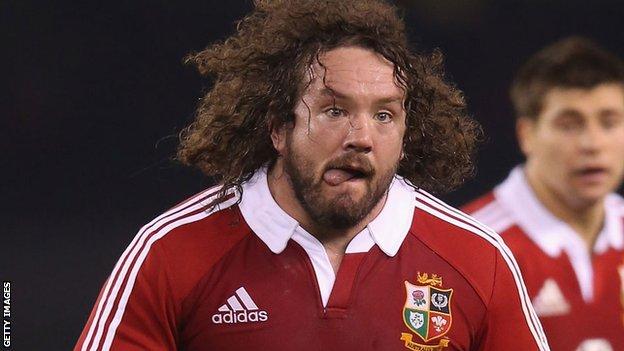 Adam Jones says he is unlikely to join the exodus of Welsh players to France because nobody wants him.

The Wales and Lions tight-head is one of several high-profile Ospreys forwards who are out of contract at the end of this season, including Wales lock Alun Wyn Jones.

Team-mate Ian Evans is being linked with Toulon, but Adam Jones says he is unlikely to cross the channel.

All three players toured with the British and Irish Lions in Australia last summer, with Adam Jones playing in all three Tests and Alun Wyn Jones captaining the side in the decisive 16-41 defeat of the Wallabies.

Prop Jones has been with the Ospreys since the region's creation in 2003, but his contract ends in the summer of 2014.

He is out of the Wales team for the autumn series with a calf muscle injury sustained in the 24-15 defeat by South Africa on 9 November.

The 89-times capped forward was in Paris while Wales beat Argentina 40-6 last Saturday, but played down suggestions he would be following fellow Lion Jonathan Davies, who has signed for Clermont Auvergne.

"No-one's asked me," he admitted. "I'm far too old to be playing French rugby, and I'm an international so nobody wants me."

Jones added he would be speaking to the Ospreys about his future.

Jones added he hopes to be fit in time to play for the Ospreys in their Heineken Cup match against Castres on 6 December.