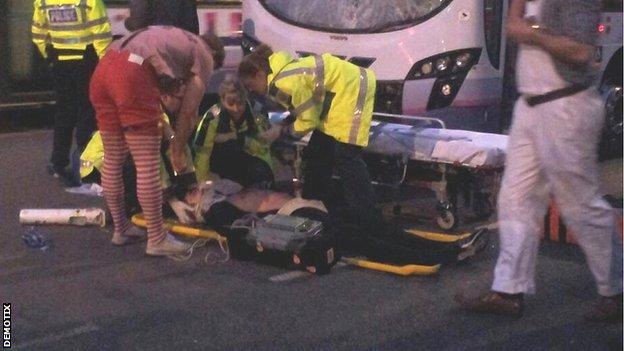 Sale Sharks fly-half Danny Cipriani says he is determined not to waste the remainder of his playing career after admitting he risked his life in an incident earlier this year.

The 26-year-old was taken to hospital with bruising and concussion after being hit by a bus in Leeds in April during a night out with his team-mates from the Premiership club.

"It was a situation where it could have been a lot more serious and could have cost me my life," he told the Manchester Evening News.

Cipriani scored almost 200 points in his first season as a Sharks player before his accident.

Signed on a three-year contract in the summer of 2012, he made 27 appearances in his debut season, scoring four tries.

This season he has scored two tries in eight league and cup appearances since returning from his accident.

Cipriani insists he has learned lessons from what happened seven months ago and insists he can carry on playing for another "nine or 10 years".

"Looking back, what happened in Leeds in April definitely did make me refocus," he added.

"The immediate focus was on getting fit and I had a very successful pre-season and came back looking to be a better athlete.

"It also reminds you that it's a short career.

"I reckon I've probably got nine or 10 years left in me, so it's about making these next years ahead of me the best."