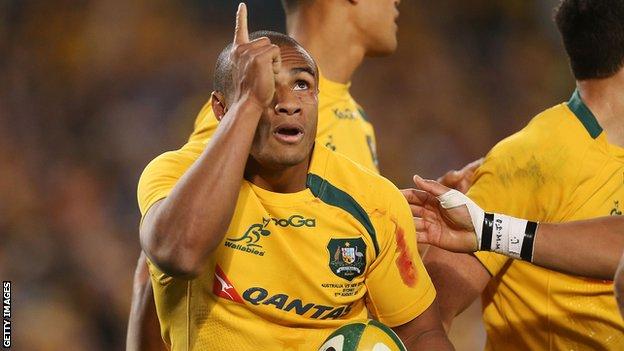 Asked during the week the differences between South Africa and this week's opponents Australia, Scotland coach Scott Johnson described them as "polar opposites".

It's hard to disagree with him. South Africa were, and are, a percentage team basing their game on a strong driving line-out, power runners and the ability to grind a team down before possibly opening up later in the game. Australia, conversely, use the set-piece as a means to get the ball to their backs - their area of strength - more often than not using off-the-top ball at line-outs and trying to get the ball in and away at scrum time.

The Aussies are innovative and dangerous. However, against Ireland last week we did see a try from a driving line-out (with nine players in the line) and some dominance in the scrum despite this area being a historical weakness.

Keep it simple, make the gain-line and generate momentum

There are some changes to the Scottish line-up after the 28-0 defeat by the Springboks. Duncan Weir replaces Ruaridh Jackson at fly-half; probably the plan at the start of the autumn series but also well merited.

Weir has made some errors but he looks spritely and confident and the starting berth will allow him to settle into his game.

Lock Grant Gilchrist skips from what was supposed to be a bench spot to start - due to injury to Tim Swinson - alongside Jim Hamilton, who wins his 50th cap. Gilchrist is not flashy but he'll put his head where others won't. He's a work horse.

The other change of interest is Johnnie Beattie coming in for John Barclay in the back row, with Kelly Brown taking the number seven jersey. I like Dave Denton and Beattie together as they are both powerful carriers with the ability to offload. Match that with Gilchrist, Brown and Ross Ford doing the grunt and you have a nice balance.

Australia's strengths lie mainly in their back division. Scrum-half Will Genia, fly-half Quade Cooper and full-back Israel Folau are the kind of talents you rarely see one of in a decade... and they have three.

The ability of Genia and Cooper to take the ball to the line, attract defenders and put runners in space make it look like they can see what we see when we're sitting in the stand 20m above the play. Folau is dominant in the air, quick, athletic, evasive, and skilful - he is the complete package.

They have pace and power on the wings, with 20-year-old Chris Feauai-Sautia and Joe Tomane.

In the forwards they have Michael Hooper. I sometimes think that Hooper and Ross Rennie were separated at birth except Hooper has maybe grown out the blond locks a touch more. Incredibly strong over ball, destructive in the tackle and pace like a centre. He has been the match-winner on many an occasion this year.

Hooker Stephen Moore is my last 'one to watch'. He's a key ball-carrier with pace and the skills to offload. Watch out for him on Genia's shoulder.

It's an interesting blend in the back division with two of the significant changes from last week in the centres. Mike Harris and Christian Lealiifano have played the majority of their rugby at stand-off and have the characteristics to match; strong passers with solid kicking games.

These changes would not have been part of Ewen McKenzie's plans but due to injury and suspension they have been forced upon him.

I'd expect Australia to adapt their game plan accordingly with them dropping a bit deeper during the inevitable 'kick-tennis' phases of the game to take the pressure off the non-kicking wingers. In turn, expect the wingers, Tomane and Feauai-Sautia, to do their fair share of ball carrying or 'crashing up' to free up Harris and Lealiifano for phase play.

Scotland's tactics for this game must involve challenging the 10, 12, 13 channel. Get Cooper and Harris tackling, ideally with Duncan Taylor or Sean Lamont from full-man line-outs, or Beattie and Denton from shortened line-outs.

Keep it simple, make the gain-line and generate momentum. Through the second phase I'd look to challenge the 13 channel. As I've mentioned before I think outside centre is a very specialist position and Lealiifano is very short on experience in this area. Challenge his defensive decision-making in those wide channels using deception and the pace of Sean Maitland and Tommy Seymour.

I'd stick with the attacking kick strategy that worked on occasion against South Africa, especially the crossfield kicks to Lamont's wing.

Defensively, the message is shut down Genia. Although he is an incredible talent, he is a bit short of confidence after a rough couple of months. He's being allowed to play his way back into form but he's vulnerable at the moment. Don't give Cooper too much space to run or he'll have a field day so that means working as a three with your inside and outside defender. Finally, watch out for the aerial threat of Folau - he's played Australian Rules Football.

I don't trust weather forecasts but apparently there is under a 5% chance of rain on Friday and Saturday. This is key to Scotland's attacking game. I feel they will really look to play quickly and with tempo, as will Australia, so here's hoping for a real spectacle.