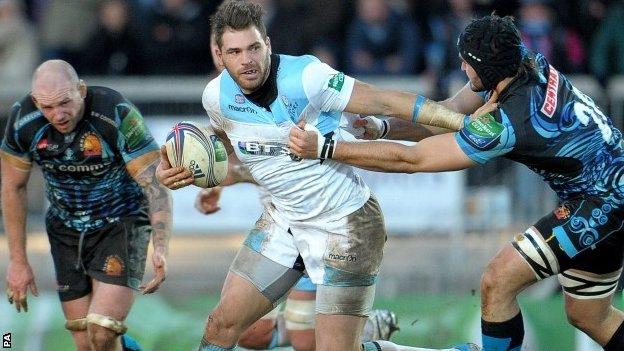 Glasgow fought back from 10-0 down to beat Exeter, who replace them at the bottom of Pool Two.

Chiefs winger Fetu'u Vainikolo burrowed over for the opening try, converted by Henry Slade, who also kicked a penalty.

The Warriors hit back with Sean Maitland taking advantage of an overlap created by two Chiefs players receiving treatment to cross in the left corner.

Sean Lamont added a second try before half-time, while Stuart Hogg converted it and kicked a second-half penalty.

Slade had an opportunity to hit back for the home side but his long-range penalty attempt drifted left of the uprights.

Glasgow, who won the home tie 20-16 in October, were content to run the clock down in the final stages as Exeter's hopes of securing more than a losing bonus point ended in vain.

Gregor Townsend's Warriors, on 10 points, must beat leaders Toulon in Scotstoun in their final pool tie to try to pip Cardiff, on 13 points, to second spot and with it a possible place in the Amlin Cup.

Exeter head coach Rod Baxter: "I don't think that there was a lot left in the Heineken Cup for us, other than an outside chance of getting through to the Amlin.

"We have looked at this group of two Heineken Cup and two LVCup games to make sure we are in a really good place for the next round of the Premiership.

"We put out a very strong team with quite a few changes from the Wasps game and if we had forced a try in that last passage of play, having made 10 changes and beaten a Glasgow team going full on, then we would be pretty pleased with ourselves.

"The positives are there for us and we have come up with a losing bonus point."

Glasgow head coach Gregor Townsend: "We knew if we were able to pick up a win against Exeter, and other teams were to lose, then there could be a chance of getting into the Amlin if we were to pull off a win next week against Toulon.

"When you have Toulon coming there is nothing to lose.

"We know how difficult it is going to be because they will be coming to Glasgow looking for a win to get a home quarter-final tie.