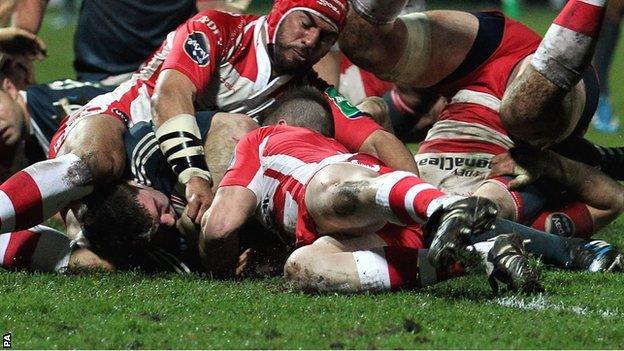 Munster wrapped up Heineken Cup Pool Six as they ultimately won with a degree of comfort away to Gloucester.

Charlie Sharples scored a converted try for Gloucester on half-time and they twice went close after the restart.

But it was the power of the Munster pack that told in the end as Peter O'Mahony's try and Keatley's conversion and further penalty saw them home.

A sold-out Kingsholm - Munster's vocal red army had once again travelled in numbers - thoroughly enjoyed a pulsating encounter but come the final whistle it was definitely the visiting fans in higher spirits as they extended their tournament record by reaching the knockout stages for the 15th time, while in contrast Gloucester suffered their seventh home defeat of the season.

The hosts attacked with real pace and width but in the end it was the power of the Munster pack and their ferocious defence, allied to Gloucester's inability to finish off half-chances, that was the difference between the two sides.

England centre Billy Twelvetrees, captain for the day, could have kicked the hosts into the lead but missed two penalties and it was Keatley who got the scoreboard ticking over with a penalty of his own.

The fly-half then threaded through a precise grubber kick for winger Earls to race onto and score the opening try of the game, and the conversion put Munster 10-0 ahead.

After their humiliation at home to Saracens in the Premiership last week it looked as though Gloucester were once again facing embarrassment in front of their passionate fans.

But a side packed with young talent refused to give in and hit back in spectacular fashion just before half-time.

The winger stepped past one man before a second slashing side-step saw him beat the cover and race over near the posts.

Twelvetrees' conversion meant Gloucester were right back in it at the break, trailing only 10-7, and they exploded out of the blocks in the second half.

The hosts were shifting the ball wide at pace to move Munster around and their flyers in the backs were looking threatening with ball in hand, with one Jonny May break only halted by a desperate James Downey tap tackle at full stretch.

Minutes later May was bundled into touch a couple of yards from the tryline after another threatening attack and the Munster pack then took temporary control.

They bullied Gloucester back at a five-metre scrum on the hour mark and although the hosts survived the initial assault, blind-side O'Mahony drove over from close range.

Keatley converted and although Gloucester came at the visitors time and again in the latter stages, committed defence saw Munster to victory and a place in the knockout stages yet again.

"We had a young pack of forwards out there in terms of European Rugby and they were magnificent, they went up against a very experienced side.

"Charlie Sharples really showed his finishing qualities, it's been a frustrating time for him but I thought he was superb today.

"We threw everything at them and we played with great intent, I was pleased about that but maybe it wasn't simple enough at times.

We played against a side who have got a huge heritage, tradition and belief in this competition, and they would've been under huge pressure."