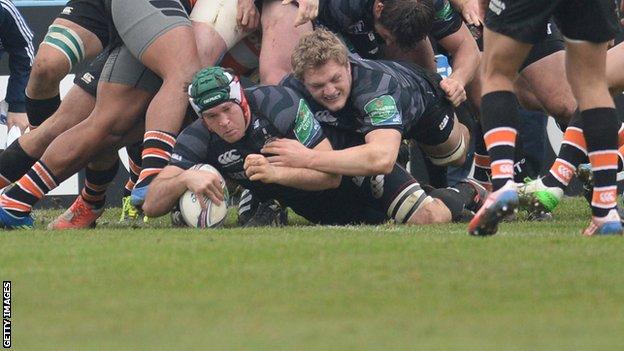 Leicester picked up maximum points in a 34-19 win at Treviso to keep alive their chances of finishing top of Heineken Cup Pool Five.

The visitors had to come from behind for a fourth straight group win, having trailed 13-8 at half-time.

David Mele kicked three penalties and a conversion for the Tigers.

Leicester will host Ulster at Welford Road in their final pool game next Saturday. The Irish side are two points clear at the top, but both sides are already guaranteed a place in the quarter-finals.

Salvi crossed the line for Leicester's first try following a strong drive from the Tigers pack.

Treviso replied when Cittadini evaded a tackle from Benjamin from a metre out and at one stage led 16-8.

But Leicester began their comeback when Benjamin finished a superb run out wide and then referee Romain Poite awarded a penalty try when Treviso attempted to bring down a maul.

Benjamin then secured the bonus point with his second try of the game and 12 minutes remaining.

Leicester full-back Matthew Tait: "We got what we set out to achieve from the game and that was maximum points.

"At half-time we were in a bit of a hole but it's a mark of this team that we've been in that position a few times this year and we've managed to dig ourselves out of it.

"Taking maximum points sets us up for next week and that's how we want it. It's in our own hands. Ulster are playing well but it's a winner-takes-all game at Welford Road and it should be a cracking game."