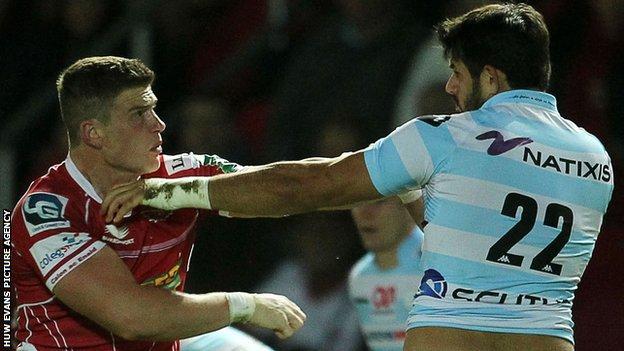 Scarlets are without Wales hooker Ken Owens and full-back Liam Williams for their Heineken Cup Pool 4 trip to Racing Metro on Friday.

Owens has an ankle injury and Williams a hand problem.

A heavy win for either side in Friday's clash would put Quins under pressure to make the most of home advantage against Clermont Auvergne on Saturday.

Quins are four points behind the French side and can be overhauled by Racing or Scarlets,

Scarlets head coach Simon Easterby admits his side's back-to-back December defeats by Clermont Auvergne have left them trailing in the race for a quarter-final place.

Those losses were among six successive setbacks, including two by Welsh Pro12 rivals Ospreys.

Easterby said: "We've probably made things hard on ourselves with back-to-back losses to Clermont but this group of players needs to feel that the hard work they've been putting in is paying dividends.

"We'll be energised as a group going back into the Heineken Cup this week and we've already shown this season that we can create things in broken play.

"Ultimately a lot of the things we're not doing or not getting right is within our control and we'll be looking to put that right on Friday evening."

Wales and British and Irish Lions scrum-half Mike Phillips makes his home debut for the French top club against the region he regards as his home team.

"I can't wait to have my first game at Yves-du-Manoir," after being following an allegation that he turned up to a team video analysis session under the influence of alcohol.

"Growing up as a kid I always supported the Scarlets, and even if the club was called Llanelli at the time, it's where I got my start in professional rugby.

"I played two years for the Llanelli-21s, and then had two seasons for the first team before moving to Cardiff.

"For me, playing my first home game for Racing against my first professional club, somehow that has a nice ring to it."