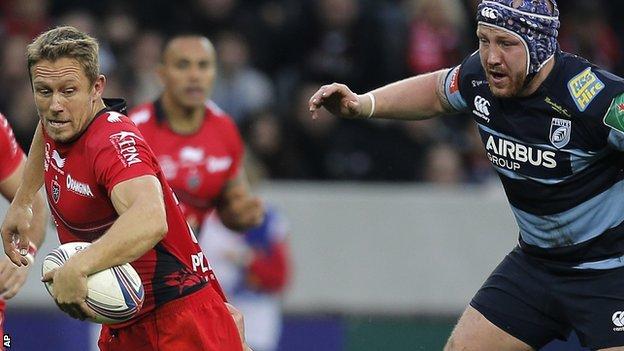 Toulon's pack powered the Heineken Cup holders into the 2013-14 quarter-finals, aided by the boot of Jonny Wilkinson, who kicked 23 points.

The former England fly-half added conversions to a hat-trick of penalty tries and one by wing David Smith.

Blues led briefly after lock Filo Paulo crashed over and they fought back with a Sam Hobbs try late on.

Leigh Halfpenny kicked four goals, but four of his team-mates went to the sin-bin amid almost relentless pressure.

The Welsh region can now target an Amlin Challenge Cup place when they host Exeter Chiefs in the Heineken Cup's sixth pool round on Saturday, 18 January.

Phil Davies' side will have to show the same resilience that ensured they did not fall to an even heavier defeat in Nice.

The contrast in styles that Toulon and Blues brought was evident from the opening stages of the Pool 2 encounter.

Toulon's reliance on driving line-outs and scrum power caused problems from the visitors.

Davies' side harried their opponents and moved the ball around whenever the chance arose, but it was not enough to help them repeat their against the star-studded French side.

Wilkinson made the most of his side's forward dominance with the early penalties that put his side 6-0 ahead.

The first went over after Blues wing Chris Czekaj was sin-binned for illicit work at a tackle.

Halfpenny, who has been heavily linked with a move to the French club at the end of the 2013-14 season, levelled with two of his own.

Halfpenny added the conversion from the touchline to put the visitors into a 13-12 lead against the run of play.

But 2003 England World Cup winner Wilkinson ensured his side went into the second period 15-13 ahead with his fifth successful shot at goal.

Blues skipper Gethin Jenkins suffered a knee blow as the first half wore on and was replaced at the break at loose-head prop and as captain by Hobbs.

And worse was to follow when after the usually-reliable Halfpenny dropped a pass close to his own line from the restart.

And with a similar outcome to the next set-piece, referee Greg Garner awarded a penalty try.

Another followed within minutes after injured Josh Navidi's first-half replacement Ellis Jenkins pulled down an a maul as it advanced toward the visitors' line, leaving Blues down to 13 men while and Borrust were absent.

Wilkinson added conversion to both penalties and launched the move from his own 22 that ended with wing David Smith powering over on the right flank.

Blues' chances to make their mark were few and far between in the second half.

But after Alex Cuthbert's burst from his own half, the visitors' attacking momentum continued until Hobbs went over and Halfpenny converted.

However, having held out against Toulon's attempts to take a bonus point since Smith's 48th minute touchdown, the visitors eventually cracked.

With number eight Robin Copeland having become the fourth Blues players to be sin-binned, their scrum was under even more pressure and conceded a second penalty try at that phase.

Wilkinson added the conversion to seal his side's win.

Cardiff Blues boss Phil Davies told BBC Radio Wales: "[It was] a bit frustrating because the boys spilled their guts out there for 80 minutes and when we were 15 against 15 we were quite competitive.

"We had a good first half in fact. We were doing lots of things we wanted to do.

"We were in the game, but second half it was tough for the players and we stuck in there and that's something we can take out of it."