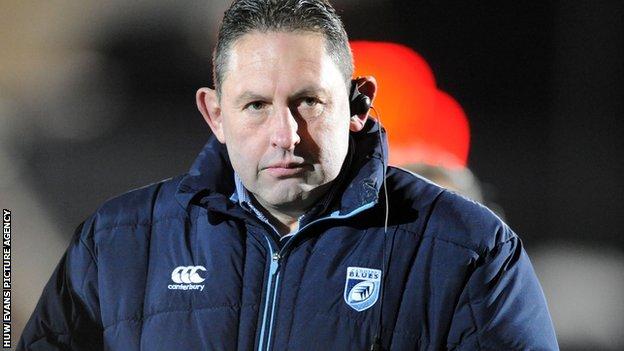 Boss Phil Davies says Cardiff Blues aim to sign up to six players ahead of 2014-15 as well as holding on to Sam Warburton and Leigh Halfpenny.

Davies' statement came amid over funding, the exodus of players and cross-border competitions.

He says holding on to Warburton and Halfpenny is vital.

Davies added the Blues are trying to retain as many of players as possible and want to "add four, five or six".

The Blues lose South African-born Wales flanker Andries Pretorius to Worcester at the end of the current season and have been linked with Scarlets' back-rower Josh Turnbull.

They have also ensured Wales and British and Irish Lions win Alex Cuthbert is to remain at the Arms Park until the end of the 2015-16 season.

Davies added: "We've got to keep working through trying to keep our best players and also trying to recruit some quality players as well.

"We're lucky. We've got a huge turnaround in players, but we're trying now to actively keep as many as we possibly can because we've got a lot of quality, young players.

"And [we] particularly [want] keep our top players, and then and add four or five, six players on top of what we've got.

"We've got to keep nurturing and building and improving what we've got as well as getting quality on top.

"And keeping Leigh and Sam is vital."

Halfpenny and Warburton are both out of contract at the end of the 2013-14 season and have been linked with potential transfers to clubs outside Wales.

at some stage against Toulon in the Heineken Cup on Saturday, but Warburton's shoulder injury continues to keep him on the sidelines.

The latter's absence for several months has prompted Phil Davies to consider recruiting a regular fly-half to boost strength in depth.