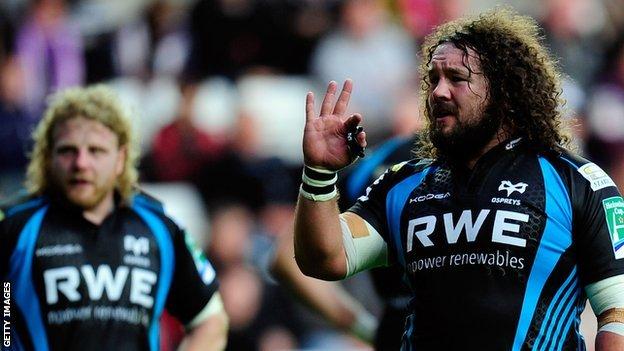 Ospreys coach Steve Tandy and prop Duncan Jones want an improvement to their scrum when they host Northampton in the Heineken Cup on Sunday.

The Swansea-based region are bottom of Pool 1 with a win and three defeats and lie third in the Pro12.

Tandy and Jones admit their set-piece is not where it 'needs to be'.

Duncan Jones, 35, won the last of his 57 Wales caps in 2009 and his long-time prop colleague Adam has gone on to make 89 Wales appearance.

Hibbard, like Adam Jones, was among the stars of the 2013 British and Irish Lions 2-1 Test series win over Australia.

They also have three more Wales front-row caps to call on in props Ryan Bevington and Aaron Jarvis and hooker Scott Baldwin.

But ahead of meeting Aviva Premiership club Saints, Tandy and Duncan Jones, while confident in their scrum, also accept it has not reached the standards they would have hoped this season.

Changes to the sequence that brings two packs together have altered the dynamics of the phase.

And the International Rugby Board has announced a fresh change that will be introduced for the upcoming fourth round of European competitions, where the referee will use a non-verbal signal for the ball to be thrown in.

Up to now as part of a trial, the referee has used the phrase "yes nine" to tell the scrum-half he can put the ball in.

Tandy said: "Obviously the new laws have gone on and it's a little bit different, but it's not a major concern for me because I know Gibbo's (forwards coach Chris Gibbes) working hard at it.

"And the guys know we need to improve in that area and it will be a real good test for us against Northampton.

"But it ain't something I'm overly concerned with at the minute."

Tandy says his front-row forwards have taken more time than he would have liked to master the IRB rules on the scrum engagement that came into force this season.

The changes effectively depowered the big 'hit' that front-row forwards sought and have led to a more technical approach to setting scrums.

Tandy added: "There's another change in the law straight away. The referees are not going to call the ball in now.

"So it's just something we've got to get used to. And he [Adam Jones] is a British Lion - a couple of months ago he was playing in a Test winning series so it ain't an issue.

"But we are fortunate to have Aaron Jarvis and Adam so we've got that ability to change things around."

Duncan Jones added: "Maybe it's taken us a little bit to adapt to the change and it's something we're working hard on.

"You don't become a bad scrum overnight, but we understand if teams have watched the last couple of performances - we haven't been where we need to be.

"We have to give credit to our opposition, who've adapted well and performed well on the day.

"But we haven't got doubts on our scrum.

"We understand we're not where we need to be and where we can be."