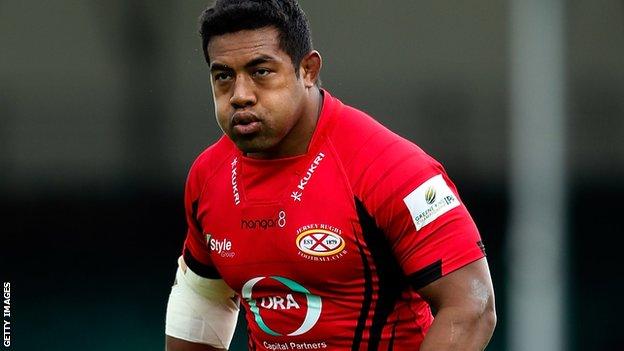 Jersey leapfrogged Ulster Ravens into second spot in their British and Irish Cup group, thanks to a 37-19 bonus-point win over the Ravens.

Drew Locke touched down to give Jersey the lead but Ravens fly-half James McKinney replied with a try of his own.

The hosts were back ahead when Grant Pointer went over in the corner and sealed it with a last-gasp penalty try.

It was Jersey's first win in any competition since mid-November and brought an end to a six-match losing streak, as new head coach Harvey Biljon watched on.

He may well have been worried early in the game though as the visitors raced into a 12-3 lead.

Atkinson burst through for the opening score and then McIlwaine claimed his second try against the Channel Islands side this season, when he raced onto McKinney's kick to touch down in the corner.

As the half wore on Jersey battled their way back into the clash and Taione's try reduced the deficit to a single point at the break.

Just moments into the second period the hosts were in front for the first time thanks to Locke's score but the lead was not to last long. The Ravens were back ahead when McKinney cut through Jersey's defensive line for a try, which he converted.

They were to be Ulster's final points of the game though as Jersey found another gear. Niall O'Connor's penalty pulled his side level to start a series of 21 unanswered points.

A darting run from full-back Jack Burroughs eventually saw the ball reach Pointer out wide on the left and he crossed the whitewash in the corner. O'Connor's impressive conversion was followed by two successful penalties as the Championship club closed in on the win.

With time ticking away they sniffed a fourth try and the bonus point that would come with it. Ulster back-rower Michael McComish was sent to the sin bin as Jersey's pack pressurised the try-line and with the man advantage they were rewarded with the penalty try in the final phase of the game.

Cornish Pirates have already guaranteed top spot in Pool Six with two games to spare after taking maximum points from their opening four matches. Jersey and Ulster can no longer qualify.