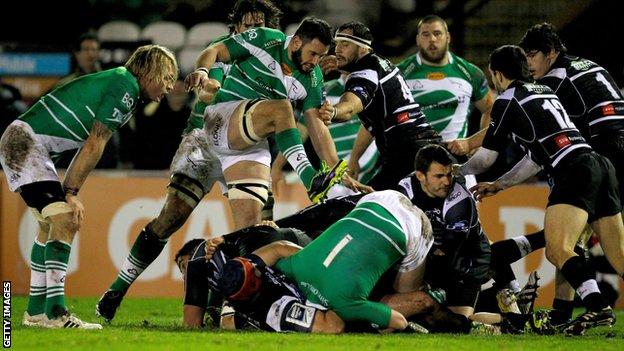 A scrappy opening saw Joel Hodgson miss two attempts at goal for Falcons, with Laranjeira accurate at the other end.

Brive were reduced to 13 men just before half-time and were penalised for persistent collapsing of the scrum, with Falcons awarded a penalty try.

Hodgson's conversion saw Newcastle lead 7-3 at half-time, but Laranjeira kicked Brive to the brink of the last eight.

After a tight opening, Hodgson had the first attempt at goal of the night but put his kick wide, while his second effort hit the outside of the post.

The first half was disjointed and the visitors benefited when Laranjeira successfully landed a penalty after Rob Vickers failed to release at the ruck.

Brive had Api Naikatini and Keiron Murphy sin-binned in quick succession and were then penalised at the scrum with the award of a penalty try for the hosts, which Hodgson converted.

The visitors had a four-point deficit at the break but, despite being two men down for the start of the second half, Laranjeira's kick closed the gap to one.

He then missed a straightforward chance to put his side ahead before falling short with a long-range attempt.

Brive thought they had gone ahead but the television match official ruled the ball had not been grounded as they went over the Newcastle line before Laranjeira recovered his nerve to edge the visitors into a two-point lead that proved enough for them to secure victory.

The result means Newcastle cannot qualify for the knockout stages if Brive avoid defeat in the final round of pool matches against Calvisano next week.