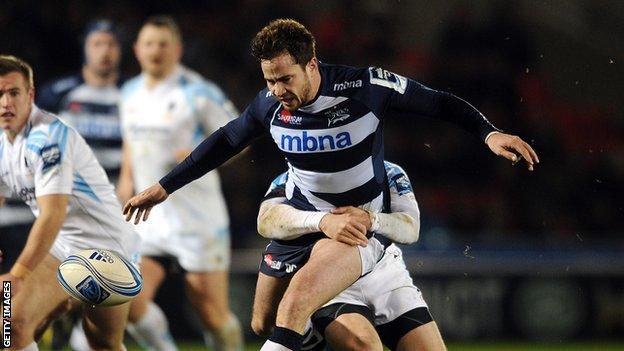 Sale's third win against Worcester this season moves the Pool One leaders to the brink of sealing a place in the Amlin Challenge Cup last eight.

A Dwayne Peel try and two successful Danny Cipriani penalties put the hosts in control at the break.

Sale, who won the European Challenge Cup in 2002 and 2005, have not made it to the quarter-final stage of competition since 2008.

Paul Warwick, who made it 11-3 with a first-half penalty, left on a stretcher with an injury after the break.

The game was stopped for more than 10 minutes as the fly-half received treatment and neither side managed to score again after that. There was no immediate news on Warwick's condition.

Sale move five points clear of Biarritz at the top of Pool One with the French side travelling to Oyonnax on Saturday.

The Sharks' failure to clinch a bonus point has opened the door for Biarritz to draw level. It sets up a potential winner-takes-all meeting between the top two sides at Parc des Sports Aguilera next week if they can get the win in the all-French clash.

Cipriani wasted the Shark's first opportunity inside five minutes, knocking the ball on with just one defender to beat after James Gaskell's break.

The 26-year-old, whose hopes of returning to the England squad were boosted by national head coach Stuart Lancaster, did put the hosts ahead with his first penalty attempt on goal.

Peel started and finished the attack, involving Mark Cueto and Gaskell, for the game's opening try after a poor Worcester line-out in their attacking half.

Cipriani failed to add the extras and missed a penalty before converting his next effort to make it 11-0.

Worcester's only reply came just before the half-hour mark, with Warwick's first shot on goal successful.

Tuitupou finished well to complete the scoring but the former New Zealand international was then sin binned, leaving Sale to finish the game with 14 men.

Worcester, who are bottom of both the group and Premiership table, have now won just once their last 19 games in all competitions.