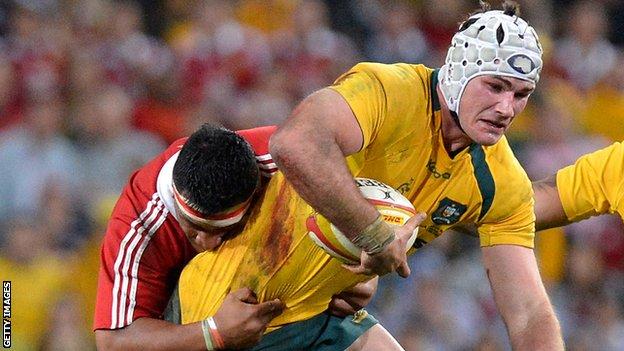 Australia captain Ben Mowen has effectively ended his chances of playing for his country in the 2015 World Cup after deciding to play in Europe at the end of 2014.

The Australian Rugby Union has a policy of only picking home-based players.

"I would have loved to have lined up to help Australia win the next rugby World Cup," said loose forward Mowen, 29, who will join a French club.

"But my priority at this stage in my life is my family."

Mowen said the heavy travel schedule involved in Super Rugby and with the Wallabies had caused him to miss time with his wife and daughter.

He added: "I will be cheering hard from a distance - we have the squad and coaching staff to achieve a Rugby World Cup win in 2015 and I wish them all the very best."

Mowen, who guided the ACT Brumbies to the Super Rugby final against the Waitkato Chiefs, made his international debut against the British and Irish Lions last June before being made captain by coach Ewen McKenzie.

"It's obviously disappointing to lose a player of Ben's calibre," McKenzie said.

"But after speaking to him about his personal priorities, we appreciate that he is making this decision based on what is right for him personally and professionally."