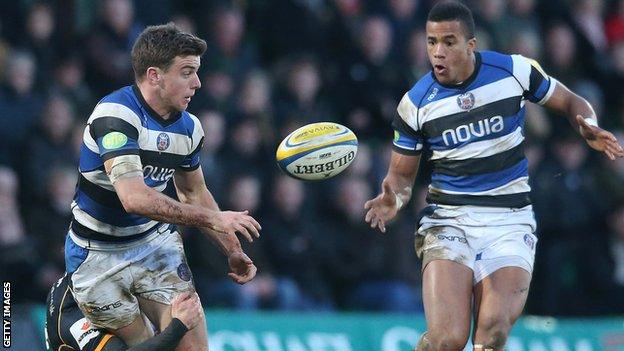 The dropped Flood, 28, has won 60 caps for his country but is leaving Leicester at the end of the season for an as-yet unspecified French club.

"George Ford put the finishing touches to a great first half of the season with a very accomplished performance against Leicester.

"It showed he can spot an opportunity and execute, makes good decisions and plays without fear of making mistakes.

"Right now, statistically, he is the most rounded attacking 10 in the Premiership and deserves his elevation into the EPS.

"Luther Burrell, too, has earned his spot by putting in effective, tidy and impressive performances.

"And Anthony Watson isn't a surprise - we all want to see how he deals with the pressure and expectation playing for England brings, if he gets his chance."

Head coach Stuart Lancaster said: "Given the policy of not selecting players based overseas it's important we allow others to progress."

Eleven players from outside the EPS are in a 35-man Six Nations training squad.

They have been called up because Lancaster has eight elite squad players currently unavailable because of injury, including Leicester centre Manu Tuilagi and Northampton prop Alex Corbisiero.

"We've got eight injuries in the senior squad, which is quite a significant number, but it creates a great opportunity for some other players," added Lancaster.

"Twenty months to the World Cup, 20 games to go, so we see it as the right time."

England only pick players based overseas in "exceptional circumstances" and Flood's pending move to France signals the end of his international career.

Lancaster described Flood's decision to play in the Top 14 as a "big blow".

He told BBC Sport: "To lose a player of that calibre, that experience, from our squad is disappointing.

"I had a couple of conversations with him and impressed our desire for him to stay and play his rugby at Leicester, and then be available for England.

"But he's been great in the conversations, very mature, honest and open. We respect his opinion and wish him luck."

Ford is the only change to Lancaster's elite player squad, with Owen Farrell of Saracens and Gloucester's Freddie Burns the other fly-halves, although Burns has been earmarked to play for the Saxons against the Irish Wolfhounds and Scotland A, with Myler promoted to train with the Six Nations squad.

Lancaster said the 20-year-old Ford's display during Bath's 27-27 draw against Leicester at the weekend clinched his place in the squad.

He added: "We know a lot about him. He's been involved in the programme for a long time. I know him well and it's the right decision to bring him through.

"It's his temperament which sets him apart. He's got incredible maturity and great leadership for someone so young.

"I speak to experienced players at Bath and they can't believe he's so mature for a 20-year-old. He'll be excited and we're excited to have him."

Elite player squad (33) until end of season including summer tour: