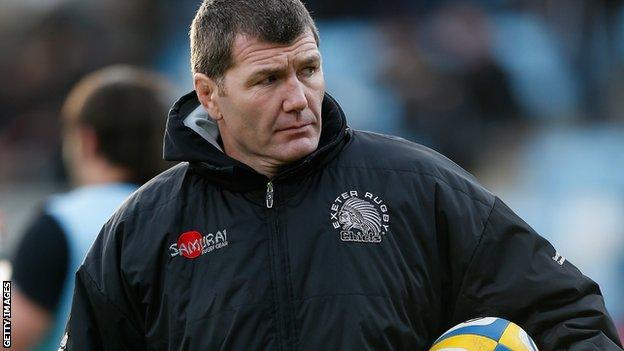 Exeter Chiefs coach Rob Baxter says a series of debatable calls from television match officials (TMOs) which have gone against his side in recent weeks have left him "frustrated".

Henry Slade had a try ruled out against Wasps at the weekend in a game the with Baxter subsequently receiving an apology.

The Chiefs have also suffered in games against Toulon and Saracens.

"In the last few weeks, anyone who saw the forward pass for the first try in the Toulon away game won't really understand how a ball which has gone 5m forwards can be a backwards pass.

"We have had a few moments and at the weekend at Wasps has probably made us a little bit more frustrated."

The crucial incident saw Slade slide in from a few metres out for an apparent try, which referee Andrew Small referred to the TMO, who ruled that Wasps scrum-half Joe Simpson had somehow prevented the grounding of the ball.

"It was always going to be an attritional game played in difficult conditions and we scored a perfectly good try and the TMO makes an incorrect call," said Baxter.

"I can say it's incorrect because I've been told it was incorrect by the refereeing officials and the TMO himself.

"It's frustrating but, at the same time, you can't feel sorry for yourself based on one call.

"There were opportunities for us to play better in the game and score and that's what we've talked about as a group, not one TMO call."

There is also a wider debate in the game about the increasing use of TMOs for seemingly obvious decisions, leading to delays and a stop-start feel to many big matches.

"I can understand that way of thinking but the reality is that if they make the right decision then it's a good thing," added Baxter.

"If the TMO just does his job and says 'yep, that's a try, there's nothing wrong with it' in the Henry Slade example, then we'd say he's come to the correct decision.

"The ref did initially think it was a try and the TMO has turned over a correct decision, so it is a strange one.

"But bigger picture, anything which means more correct decisions get made has got to be good for any sport because that's what we're out there to win games on merit."