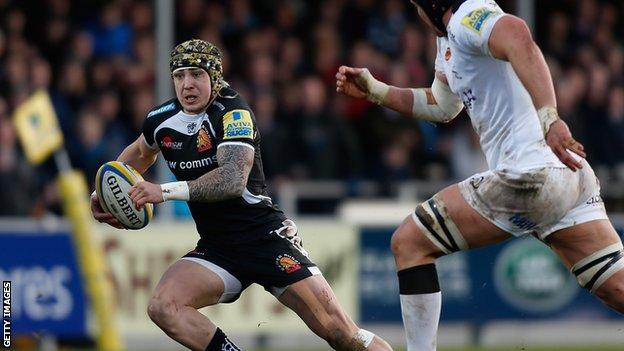 Exeter Chiefs winger Jack Nowell says his selection for the Six Nations is the fulfilment of a lifelong ambition.

The uncapped 20-year-old has been picked as part of England's 35-man squad for the tournament, alongside Chiefs team-mate Tom Johnson.

"It is literally something I've wanted ever since I've been playing rugby," Nowell told BBC South West Sport.

"I wasn't expecting to get it but to have this news is absolutely massive for me."

As well as Nowell and Johnson in the Six Nations set-up, the Chiefs also have fly-half Henry Slade and number eight Dave Ewers in the second-string Saxons squad.

"It shows the stepping stones the club is taking," said Truro-born Nowell.

"It just shows how big the club is becoming, how much it has grown and how ambitious we are as a team.

"I found out from [Chiefs head coach] Rob Baxter, who called us all in and told us how happy he is for us and how good it is for the club.

"I went away in the Saxons at the start of the year and now to have Henry Slade and Dave Ewers in the Saxons is absolutely amazing and even better for the club."

Nowell's ascent to the top of English rugby has been rapid, having played at Cornish Pirates, Redruth and Plymouth Albion on loan, and making his first-team debut for the Chiefs in October 2011.

He was named LV= Cup breakthrough player of the year in 2013 and was a key part of the England Under-20 squad that became world junior champions last year, scoring England's first try in their 23-15 victory over Wales in the final.

Nowell was named in the Saxons squad at the start of the season, and he said his latest achievement was just as much of a surprise to him.

"I've grown up watching England play and all the old boys like Jason Robinson and watching guys like Mike Brown playing in it for the last couple of years," he said.

"To think I could get the chance to do it now is just ridiculous.