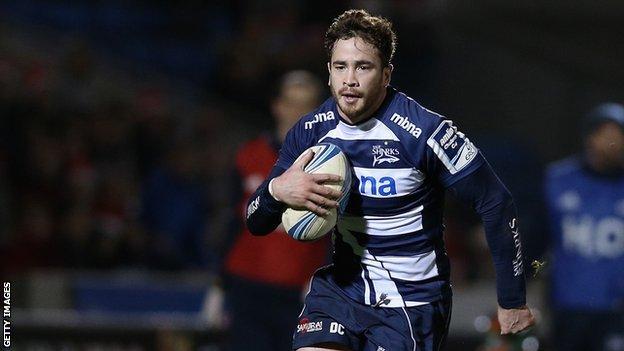 Sale fly-half Danny Cipriani's hopes of a future return to the England squad have been boosted by national head coach Stuart Lancaster.

Cipriani, 26, has been in fine form for Sale this season, but missed out on a call-up to the squad for the Six Nations, which begins in January.

"There's certainly no issue with him as a person," said Lancaster, who called Cipriani to break the news.

"I've said to him his goal has to be the summer tour of New Zealand."

Cipriani last played for England in November 2008, winning his seventh cap in a defeat by the All Blacks at Twickenham.

Saracens' Owen Farrell and Leicester's Toby Flood have been selected at fly-half for the majority of Lancaster's reign as England coach.

Farrell remains the number one choice, with Flood being dropped in favour of Bath's George Ford for the Six Nations.

Cipriani had a tough first season at Sale as the Sharks struggled against relegation for much of the 2012-13 Premiership campaign.

The season ended with the former London Wasps fly-half being knocked down by a bus in Leeds during a night out with team-mates.

However, his good form this term has helped Sale make a much brighter start to this campaign, with the club winning six of their opening 12 games to sit in a comfortable mid-table position.

Lancaster added: "I had a long conversation with him on Wednesday, a good chat. I have watched all his games.

"He's been a lot more consistent this season but I want to leave him at Sale to keep making progress, which he accepted and he said he felt it was the right thing to do.

"There are some areas where he's got some ground to make up as we move towards the World Cup.

"He's beginning to make up that ground, though, which is good."