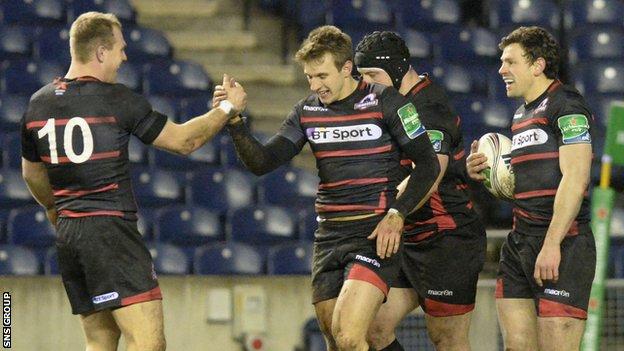 Edinburgh moved up to second in Heineken Cup Pool 6 with a fine win over Perpignan at Murrayfield.

Tom Brown scampered clear for a first-half try and excellent defensive work kept the French side at bay, with the hosts 13-6 ahead at the interval.

Cornell du Preez and Dougie Fife added two more tries for Edinburgh and Greig Laidlaw's kicking was accurate as ever.

Perpignan did grab a late score through Maxime Delonca as a bonus-point try eluded the home side.

With Munster winning at Gloucester to wrap up the group, Edinburgh will hope to hold on to second spot and a possible place in the Amlin Challenge Cup when they visit Ireland next weekend.

Edinburgh got off to an aggressive, high-tempo start, with Du Preez and fellow back-rower Roddy Grant prominent.

The Murrayfield crowd were on their feet as the hosts made ground with an expansive, flowing move but a great opportunity was squandered when Nick de Luca fumbled a straightforward pass.

The groans turned to cheers soon after when Laidlaw knocked over a penalty and there was further rejoicing when the first home try followed.

A break from Jack Cuthbert had Perpignan scrambling and in their haste to close down the marauding full-back the visitors left a huge gap for Brown to scurry through as the ball popped into his arms.

The winger raced in to touch down from 30 metres and skipper Laidlaw converted.

James Hook reduced the deficit with a penalty and there followed a period of concerted pressure from the French side.

Perpignan were in possession for close to 10 minutes but they were repelled by some ferocious defending, with a bone-shuddering hit from Willem Nel eventually bringing a knock-on.

Perpignan put the squeeze on again with a powerful drive which led to Cuthbert being harshly penalised for a late tackle and Hook popped over another penalty.

Laidlaw missed a simple penalty from a central position but made amends before the interval with an assured kick to stretch the home lead to seven points.

Edinburgh, who introduced new arrival Carl Bezuidenhout for the start of the second half, were on the back foot when a Laidlaw kick was charged down at the back of a scrum.

And the pressure resulted in Hook thumping over a penalty from long range.

Referee Peter Fitzgibbon dished out several warnings in the first half and his patience snapped with Perpignan captain Guilhem Guirado the player to receive a yellow card for an offside infringement.

Edinburgh immediately took advantage of the hooker's absence, stretching play from one flank to the other, allowing the impressive Du Preez to crash through an opponent to score and Laidlaw converted from right on the touchline.

On-trial Bezuidenhout did his chances of winning a longer deal no harm when he set up a third Edinburgh try with a clever grubber kick, which bamboozled Perpignan winger Wandile Mjekevu and Fife gleefully plunged on the loose ball, with Laidlaw again converting from a difficult angle.

Brown made a couple of exciting, jinking breaks as the home side went in search of a bonus-point try.

But it was the visitors who struck next, with replacement Delonca finishing off a lovely passing move in the corner and Hook nailing a tough conversion.