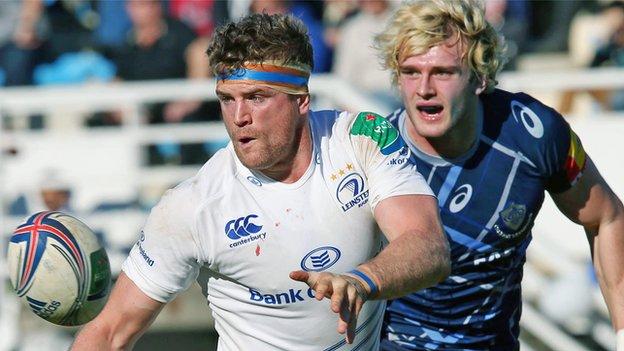 Jimmy Gopperth justified his selection over Ian Madigan at fly-half by scoring two tries as Leinster came from 14-0 down to beat Castres in France.

Scotland lock Richie Gray scored the first try for Castres with Brice Dulin getting the second in the 21st minute.

Gopperth scrambled over for a try after a fine break by Luke Fitzgerald and scored again seconds before half-time while Jordi Murphy got the third try.

It was far from Leinster's best display of the season but the hard-earned victory means they are virtually assured of a place in the quarter-finals.

The Irish province remain top of Pool Six, four points ahead of second-placed Northampton who ran out 29-17 victors over Ospreys in Swansea.

It was Castres' first home defeat in 19 games, but they started well, scoring a fantastic opening try when Remi Lamerat's mazy run set up Gray to score.

Lamerat then played a part in the second try, bumping off a couple of tackles before feeding winger Remi Grosso who passed back inside to full-back Dulin for a second great try for the French side.

But Castres were left kicking themselves after conceding a soft try from a scrum 10 metres from their own line, Gopperth skipping through some weak defence to dot down.

Kiwi Gopperth claimed a second try shortly after, driving over from close range to leave it 17-12 at half-time.

Gopperth then drew Leinster to within two points with a penalty and full-back Rob Kearney then nailed a long-range drop-goal to edge the Irish province into an 18-17 lead.

Momentum had truly swung Leinster's way, Gopperth kicking a quick brace of penalties for a 24-17 lead.

Flanker Murphy was played in for Leinster's third try to seal a vital win, Lamerat scoring a deserved late consolation try for the home side.