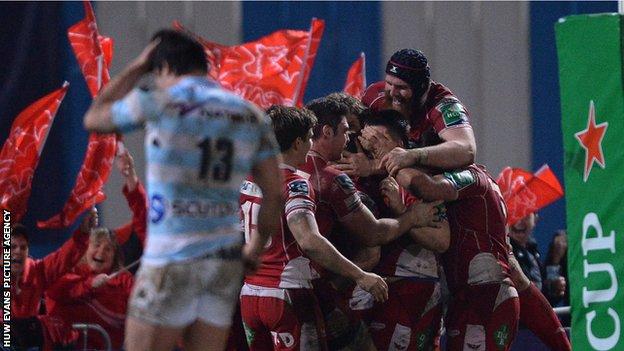 Scarlets head coach Simon Easterby says he is "delighted for his players" following their first win since November away at Racing Metro in the Heineken Cup.

The Scarlets came from behind to beat the French side 19-13 in Paris in their Pool Four clash.

The result keeps alive their slim hopes of qualifying from the group.

"It wasn't perfect and wasn't that pretty but winning out in France very rarely is," said Easterby.

Phillips gathered a high ball just inside the Racing half, before dancing through the French side's defence at pace to score much to Easterby's delight.

I just don't know how we managed to lose really

"He's obviously of capable of doing something like that with the ball in hand," said Easterby.

"Given a little bit of space he showed exactly what he can do.

"I'm just delighted for the players.

"All the hard work we've put in over the past few weeks has paid off."

Wales and British and Irish Lions scrum-half Mike Phillips was making his home debut for Racing and dived over from close-range to score against his former side after just eight minutes.

Racing's big and powerful pack provided the platform for Phillips to release the French club's backs early on before the Scarlets fought back.

Phillips, who is expected to be named in Wales' Six Nations Squad next week, was frustrated with the result.

"We had so much dominance in the game first half and I was confident we were going to win all the game," said Phillips.

"I just don't know how we managed to lose really."

Welsh team-mate and Scarlets outside-half Rhys Priestland was named man-of-the-match and was delighted to help end the regions' losing streak.

"It was a pretty poor game to be honest," said Priestland, "pretty stop-start but after the run of results we'd have we'd have taken anything really.

"We've simplified our game plan this week and it was pretty much a forward-orientated game and our pack was outstanding.

"In a few games this season we've been in that situation and sort of thrown it away but I think we showed good composure to close that game out."