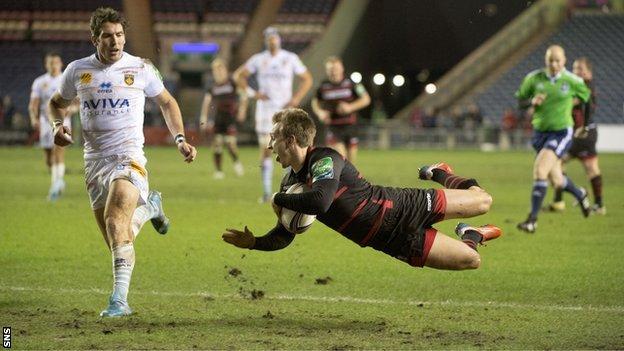 "Some of the defensive play was outstanding," Solomons told BBC Radio Scotland. "We said that's one of the pillars of our game.

"The players deserve credit for sticking to the systems and putting their bodies on the line."

With Munster winning 20-7 at Gloucester to wrap up the group, Edinburgh will hope to hold on to second spot and a possible place in the Amlin Challenge Cup when they visit Ireland next weekend.

Munster are a top team and it's going to be a big test of our character.

Brown scampered clear for a first-half try and excellent defensive work kept the French side at bay, with the hosts 13-6 ahead at the interval.

Perpignan did grab a late score through Maxime Delonca as a bonus-point try eluded the home side.

Solomons, whose side put in over 100 successful tackles and missed just two at Murrayfield, added: "It was a really good performance but you've got to keep feet on ground.

"David [Denton] had an outstanding game but across the board everybody played well.

"Munster are a top team and it's going to be a big test of our character. It's all about fronting up and putting in a good performance."

Flanker Denton's performance won him the man-of-the-match award and he, too, was pleased with his team's defence.

"It was an awesome team performance," he said. "The boys really fronted up physically.

"In seasons past we focused a lot on attack, but we want to be a team that stops other teams scoring. We did that really well.

"We're finally starting to get there and I'm really proud of our defence."

The tries were topped off with some fine kicking by captain Laidlaw, who admitted he was a little "gutted" not to get the bonus point.

"The boys really controlled the first-half," said the scrum-half. "That sets up a nice game over there [Munster] now."