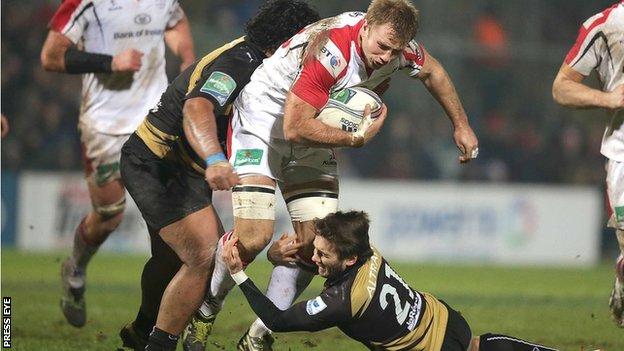 Ulster's progress into the Heineken Cup quarter-finals was confirmed on Saturday thanks to Toulon's 43-20 victory over Cardiff Blues.

The result means Ulster will qualify either as pool winners or one of the two best runners-up.

Victory over the Tigers in next weekend's final pool game will ensure a home quarter-final for Ulster.

The Irish province could reach the last eight as number one seeds if they overcome Leicester on Saturday.

Ulster would have sealed a place in the last eight on Friday night if they had gained a bonus point against Montpellier at Ravenhill.

However, they fell one try short and had to wait a day for their quarter-final spot to be guaranteed.

Ulster have now made the knockout stages of Europe's premier club competition for the fourth consecutive time.

Leicester trailed Treviso 13-8 at half-time in Italy on Saturday but fought back for a 34-19 bonus-point win.

Munster's 20-7 win over Gloucester means they join Clermont Auvergne, Toulon, Ulster and Leicester in qualifying for the quarter-finals of the Heineken Cup with one round to spare.