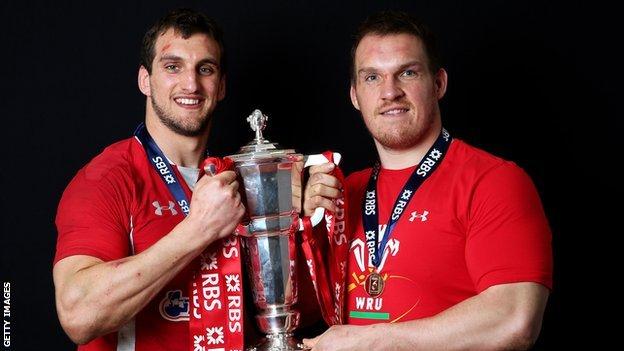 Veteran prop Gethin Jenkins is a fresh worry after coming off at the break.

However, Blues boss Phil Davies said Wales captain Sam Warburton could return from shoulder trouble "in a couple of weeks".

Davies said Jenkins's leg injury was similar to those that have restricted him to nine games in 2013-14.

Jenkins will undergo a scan on his knee on Monday.

Gatland names his squad for the tournament at lunchtime on Tuesday, 14 January.

Warburton has not played since suffering a fresh shoulder injury during Wales' autumn defeat by Australia in Cardiff.

It's a similar injury to what he's done [before], how bad, I'm not sure. We'll just have to look at the severity of it over the next 48 hours

Davies has described that as having been similar to the blow that kept Warburton out for three months after the end of Wales' 2012 Grand Slam success.

Jenkins, 33, who has won 101 Wales caps and been picked for three successive British and Irish Lions tours has been dogged with lower left leg problems in recent seasons.

Calf problems meant Jenkins was unable to take part in the Lions' 2013 tour to Australia.

And his return from Toulon to Cardiff Blues ahead of the current campaign was delayed until October.

He has made six Blues appearances this season and played in three of Wales' autumn Tests.

But he came off at half-time in their 30-26 defeat by Australia in November and did not return until coming off the bench in Cardiff Blues' New Year's Day Pro12 win over Newport Gwent Dragons.

That led to him being given the captaincy for the Blues' European trip to Nice to face Toulon.

But after being in pain and receiving treatment on the field as the first half wore on, Jenkins made way for Sam Hobbs at the break.

Boss Davies added: "It's a similar injury to what he's done [before].

"How bad, I'm not sure. We'll just have to look at the severity of it over the next 48 hours.

"Hopefully it'll be OK, but we don't know at the moment if he's torn anything or strained or twisted awkwardly.

"It doesn't look too major, but we're not too sure as such yet."

Blues centre Owen Williams, 22, who won all four of his Wales caps in 2013, suffered a hamstring injury against the Wallabies in November.

He has not appeared since, but Davies says like Warburton, Williams could return soon.

"Owen's not far from coming back," said Davies.

"Sam might be a couple of weeks so we are getting players back."

Wales begin their title defence against Italy on in Cardiff on Saturday, 1 February.