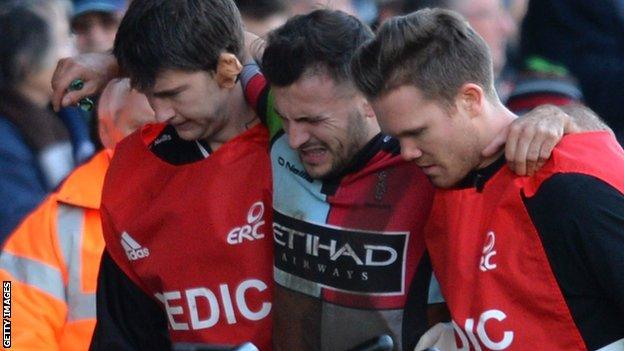 England scrum-half Danny Care faces a race against time to be fit for the start of the Six Nations after injuring his ankle on Saturday, according to Harlequins boss Conor O'Shea.

Care produced a sublime bit of skill to set up Matt Hopper's try in the 16-13 Heineken Cup loss to Clermont Auvergne.

He went off soon after and O'Shea confirmed: "Danny twisted his ankle and he's got a protective boot on.

"I hope he'll be OK in a few weeks but I doubt he'll be all right next week."

O'Shea, who saw his charges' hope of reaching the last eight in Europe effectively ended by the Clermont defeat, added: "We'll review it on Monday and see where he's at. It's pretty sore at the moment but hopefully he will be all right."

Care's dazzling reverse pass to set up Hopper's try helped Harlequins into a 13-3 lead before the class of last season's beaten finalists saw Clermont hit back to win 16-13.

"We didn't start particularly well but then a piece of absolute genius from Danny changes the energy our way and we were pretty much on top for the rest of the first half," said O'Shea.

"Danny's piece of skill was quite exceptional. You can't practice that.

"People may ask if we overplayed in the second half but it was Danny tapping and going 35 yards from our own line [that got us going]. He gave us a bit of momentum and he's a game changer."