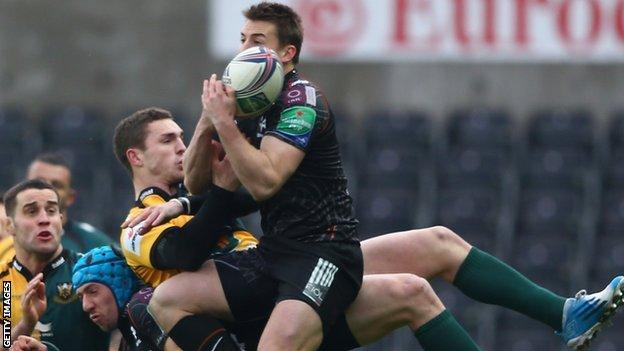 "It's obviously nice to put one on the Ospreys for myself as an said the British and Irish Lions star.

Of his second half try, man-of-the-match at Liberty Stadium North added: "I hope he [Gatland] saw it [and] wasn't in the toilet for that one."

Gatland names his 2014 Six Nations squad on Tuesday with over some of his star players to consider.

Prop Gethin Jenkins is a doubt after suffering a recurrence of lower leg problems in Cardiff Blues' European defeat by Toulon on Friday.

And for their Heineken Cup clash at last season's runners-up Clermont Auvergne on Sunday, 18 January.

North and his Saints team-mates could have taken a Heineken Cup quarter-final spot by that time.

And if they do so, they will look back on the win in Swansea as vital to that progress.

It left the Welsh region with one win from five pool games.

North, in his first season at Franklin's Gardens, added: "I've come here [Liberty Stadium] many a time and not come away with a win and it's obviously nice to put one on the Ospreys for myself as an ex-Scarlet.

"For us the first half was quite frustrating. It was quite a slow game.

"To be fair they came back in. I think that was more down to our lack of concentration to keep the ball and keep it tidy.

"It was quite close towards the end and a couple of tries helped us."

Saints host Castres on Friday and their tournament fate could rest on Pool 1 leaders' Leinster's clash against Ospreys in Dublin.

"We've got nothing to lose now," said 35-times capped North.

"Friday night we're just going to go flat out [for] five points and just leave it to the outcome."

"It was a quality try by George," said Mallinder.

"He is really settling in to the way we want to play. People say he had a slow start with us, but he did some brilliant things early on in the season.

"He's a quality player. I know he is young, but he is determined to improve and work hard at his game, which is what he's doing.