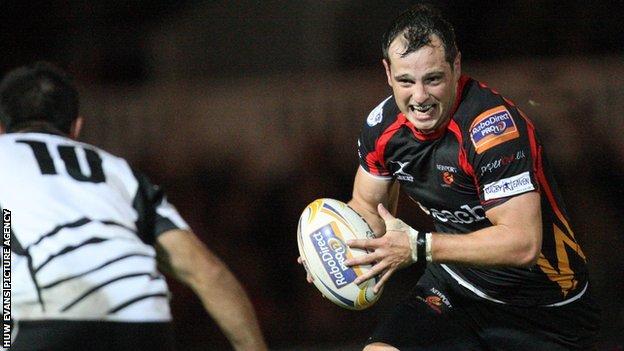 Boss Lyn Jones has confirmed full-back Dan Evans will leave Newport Gwent Dragons at the end of the season.

Evans, who won two Wales caps on their 2009 tour to North America, makes way for Lee Byrne's arrival from Clermont Auvergne for the 2014-15 season.

The 25-year-old has impressed in recent games, but Jones' mind is made up.

"I think I'll make every player unemployed and I'm sure our performances will improve greatly," said Jones.

Evans has made 64 Dragons appearances, scoring 11 tries in his 64-point contribution since arriving at Rodney Parade in May, 2012 from Scarlets.

But with 33-year-old Wales and British and Irish Lions full-back Jones wants him and Hallam Amos as his 15 jersey options.

Medical student Amos, 19, has been capped once by Wales - against Tonga in November, 2013.

Jones added: "We've got to think of the future and Dan is a really good player and I'm sure he'll have no problem picking up a deal with any English or Welsh club in the future.

"And that's all I wish is that players move on and do as well as they can.

"I made a decision that Lee Byrne and Hallam Amos would be our full-backs next season and I'm sticking to that."