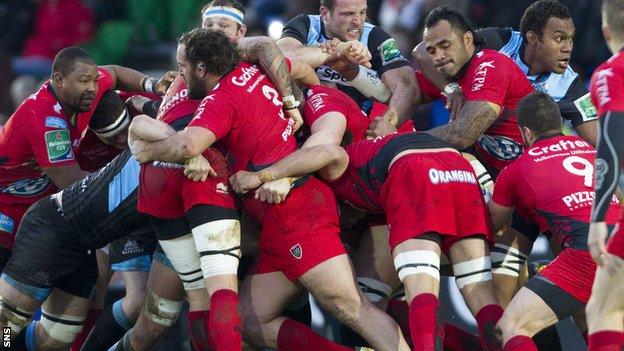 Glasgow brought the curtain down on another disappointing Heineken Cup campaign with a gutsy loss to Toulon.

Jonny Wilkinson kicked five penalties to ensure the defending champions have a home draw in the quarter-finals.

Chris Fusaro touched down late in the game to get Glasgow within a converted try of levelling.

And the Warriors laid siege to the Toulon line in the last few minutes only to be repelled by the experienced French side.

Glasgow harboured slim hopes of reaching the Amlin Cup before kick-off but finished bottom of the section after Exeter won at Cardiff Blues.

Toulon, who wrapped up Pool 2 last weekend, were 51-28 winners when the teams met on warm October day in southern France.

However, a cold, soggy afternoon in Glasgow and a pitch with patches resembling quicksand made life a lot tougher for those running with the ball this time.

The home side's defensive resolve was tested early on as the star-studded visitors dominated possession, while Wilkinson had a drop-goal attempt charged down before there was the rare sight of the English World Cup hero missing with his first penalty.

Warriors full-back Stuart Hogg embarked on a couple of promising breaks but the formidable Toulon defence was quick to close down any gaps.

Normal service was resumed when Wilkinson popped over the first points on 28 minutes.

But Ruaridh Jackson, making his 100th Glasgow appearance, soon levelled with a penalty given for offside following more enterprising play from Hogg.

As the interval approached, a scrum infringement allowed Wilkinson to land his second kick.

A third penalty from the Toulon captain sailed between the posts early in the second half as the visitors began to take more of a grip on proceedings, and number four followed soon after.

Toulon were reduced to 14 men when scrum-half Sebastien Tillous-Borde wiped out Alex Dunbar with a late challenge.

However, after failing to find touch with the penalty, Glasgow's advantage in personnel last all of 60 seconds as Niko Matawalu was shown a yellow card for thwarting a try-threatening break from sprightly prop Juan Smith with a deliberate knock-on.

Wilkinson punished the hosts further by clipping over the resulting penalty to stretch the visitors' lead to 12 points.

Just as Glasgow were beginning to look jaded, they were given fresh hope by some uncharacteristically comical Toulon defending.

A Matt Giteau kick was charged down in the scoring zone and Wilkinson looked to have recovered the situation by smothering the ball but out it popped from underneath a cluster of muddied players, allowing Fusaro to lean over and press down for a bizarre score.

Wilkinson was off target with an ambitious drop-kick and his second errant penalty raised a few half-hearted jeers from the near capacity-crowd at Scotstoun Stadium.

Substitute back-row Richie Vernon then had supporters on their feet with a great surge from deep into the opposition 22 and Glasgow edged to with a few metres of the line with phase after phase.

The home pick and drives kept coming but a wall of red stood firm until a rash decision from Weir to kick on brought the final whistle as the ball bobbled out out touch.