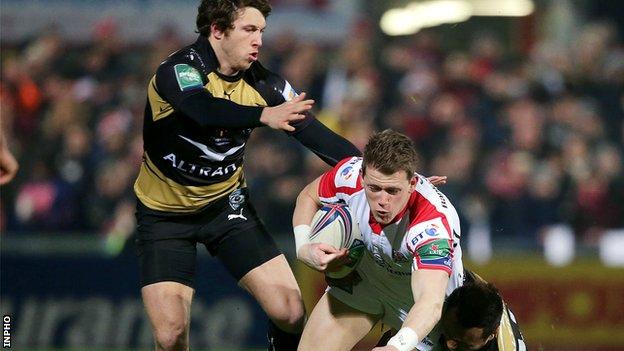 Anscombe confirmed on Monday that Gilroy sustained a broken nose and slight concussion during Friday's Friday's 27-16 win over Montpellier.

However, the Ulster coach remains hopeful Gilroy will be fit but does not expect Tommy Bowe to be available.

"We'd be hopeful Craig will still be alright," said Anscombe.

"He's taken a bit of concussion. It's just a slight knock. (The nose) It's not too bad, a bit of a small break in the nose."

Bowe has been out since November because of a groin injury and Anscombe was not optimistic on Monday about the Lions winger's prospects of being involved in the crunch Welford Road clash.

"It's touch and go (with Bowe). Most probably unlikely at this stage."

If Bowe is not deemed ready for this weekend, Michael Allen - Gilroy's replacement on Friday - represents another strong option.

A later Ulster statement added that Declan Fitzpatrick also suffered concussion in Friday's game and he will be monitored in the coming days using the normal return-to-play protocols.

Weekend results mean Ulster have secured a place in the quarter-finals but Anscombe's side must avoid defeat against their fellow qualifiers Tigers to top Pool 5 and guarantee a home game in the last eight.

"We didn't front up there. We want to make amends for that.

"We know Welford Road is not going to be an easy task so it's going to be a challenge but it's one we are embracing and looking forward to.

"We back ourselves that we are going to be able to go there to do a job."