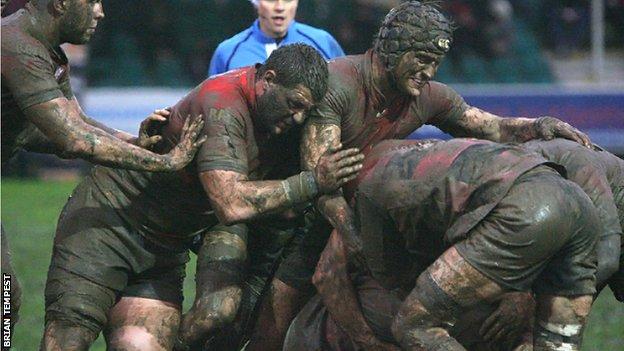 Cornish Pirates coach Ian Davies said his side deserved credit for sticking to their expansive approach despite difficult conditions against Ayr.

The 28-21 win guaranteed the Pirates a home quarter-final in the British & Irish Cup.

"There were mistakes in the wet but we said pre-match that the weather shouldn't inhibit how we want to play," Davies told BBC Radio Cornwall.

"I'm disappointed we didn't get a bonus point - we created enough chances."

It was the Pirates' fifth win in five game in the competition, but Davies's side lost their perfect record having picked up bonus points for scoring four tries in all their previous games.

"Both sides set out to play some good rugby and even in the conditions we saw some but the win was the important thing for us to get that home quarter-final," added Davies.

"We just needed to be more accurate. I think we lost more ball in contact than we have all season but that was more because of the slippery nature of the ball than big hits.

"The eight boys in from the Glasgow Warriors certainly strengthened them and the conditions were very 'Scottish' - although their coach said it was a sunny day for them!

"They ran from deep and their goalkicker stuck some kicks over from halfway line but we just had a little bit too much up front and that's what won us the game."