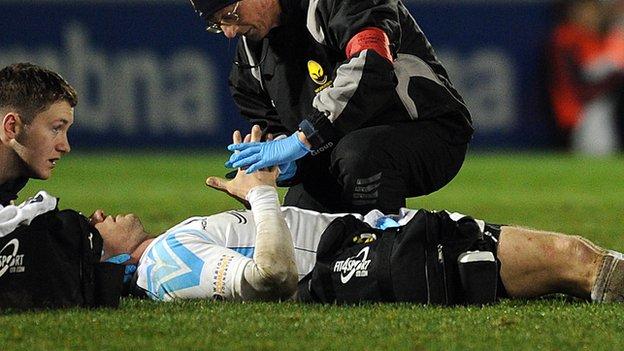 Worcester stand-off Paul Warwick will miss his side's final Amlin Challenge Cup group game against Oyonnax with the neck injury that saw him stretchered off at Sale last Friday night.

The game was held up for 15 second-half minutes at the AJ Bell Stadium as the 33-year-old Aussie received treatment.

"It creates a concern as we don't have many 10s registered for the Amlin," boss Dean Ryan told BBC Sport.

"We may have to cover Paul's absence through other avenues."

Despite the 15-minute hold-up and the apparent gravity of what appeared at the time to be a very serious injury, Ryan insists that, with head and neck injuries, it is better to be safe than sorry.

"He's pretty sore," added Ryan. "But then again he says he always feels sore on a Monday now he's 33.

"And he was actually about 30 seconds away from getting up and running back on the pitch until the medics had other ideas.

"But, although they are not always as bad as you think at first sight, a neck injury is a serious injury.

"It does cause concern and it does look dramatic from the outside but is also the right thing to do.

"It minimises any risks and makes sure everyone gets the right level of attention. The recovery time is determined by his feedback."

Warwick kicked three penalties when the Warriors drew 9-9 out in France back in October, denied victory only by Darren Barnard's equalising penalty with the last kick of the game.

But Oyonnax will arrive at Sixways in buoyant mood after beating fellow French side Biarritz 28-24 in their penultimate group game last weekend.

That ensured Worcester finished bottom of Pool One - and Ryan has confirmed that he will once again play a young, experimental side at Sixways on Saturday.

Worcester are back at Sale in the Anglo-Welsh Cup next weekend, before returning to Premiership action at home to Leicester on Friday, 1 February.