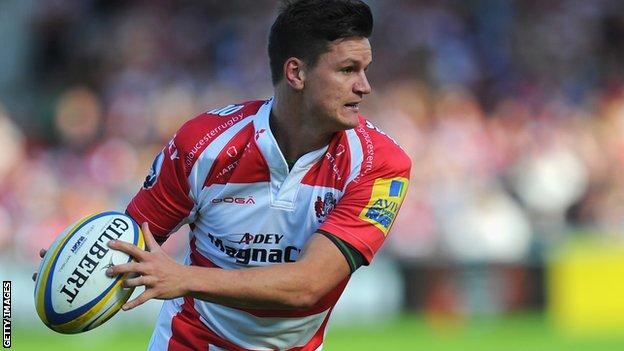 Gloucester have confirmed that fly-half Freddie Burns will leave the club at the end of the season.

The 23-year-old has been heavily linked with a move to Leicester as a replacement for Toby Flood.

Burns, who has three England caps, was the leading points scorer in the Premiership last season and racked up 350 points in all competitions.

Freddie Burns kicked two penalties on his England debut against New Zealand, a 38-21 win, and has 37 points from his three caps

"Doubtless, a statement on Freddie's future club will be made in due course. However, in terms of Gloucester Rugby, we know where we stand and we will move forward accordingly.

"Freddie has made a tremendous contribution to Gloucester Rugby and, when he does leave us at the end of the season, everyone at the club will wish him well."

Since his debut in 2009, the Bath-born number 10 has made 116 appearances for the Cherry and Whites, scoring 965 points in all competitions.

He was a member of Stuart Lancaster's England squad for the recent Autumn internationals, but did not make an appearance.

And although he was included in the elite player squad announced last week, he has been earmarked for duty with England's second-string Saxons side.

Burns, who last month admitted to being in two minds about his future, is focused on finishing the season strongly, having scored 113 points in 17 appearances this term.

"I've had a lot of things to consider regarding my future in recent months, and it's not been easy," Burns told the club website.

"But I'm still a Gloucester player and will be giving it 100%, as I always have done, whenever I pull on the shirt."