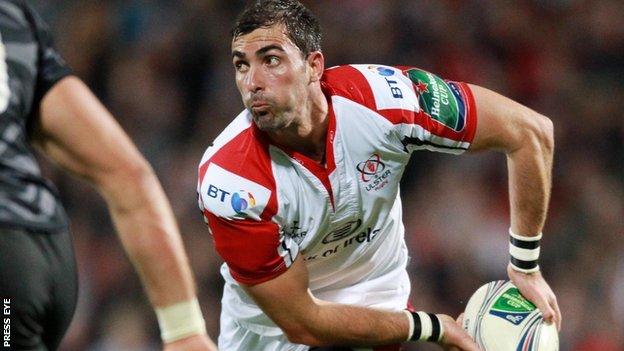 A victory for the Irish province would see them enter the quarter-finals as group winners and number one seeds, but defeat would mean a testing away trip to one of Europe's finest.

"There is plenty of experience in this Ulster team, both at provincial and international level, and the big games they have been part of in recent years will stand them in good stead," said the ex-number eight.

"John Afoa is an All Black international, Ruan Pienaar a world class performer and kicker, Johann Muller an experienced Springbok, and then you have a glut of Irish internationals such as Rory Best and Chris Henry.

"Rory and Chris are both just back from injury and the hit out they had against Montpellier last Friday will serve them well, as it was a really hard workout.

"The boys who had not played rugby for a while will have been sore the morning after, but that stands them in a better place, rather than going out against lesser opposition, maybe winning comfortably by 50 or 60 points, and not learning a lot from it.

"The fact that Leicester played a day later means Ulster have been afforded an extra day's rest ahead of this game and they will use that to get their preparations right, get their game head on and focus on what they have to do."

Leicester had to recover from a five-point half-time deficit to defeat Treviso in Italy, but like Ulster, have the incentive of a home draw in the quarter-finals to play for.

"Ulster will go to Welford Road and play the same or a similar sort of game to that which they played in Montpellier earlier in the season," argued the former Ulster forward.

"They must set their stall out early, dominate up front and be strong at the set-piece, with a solid scrum and a good lineout.

"They have to take care of the kick offs, do the simple things well, kick with a good chase line and play the game in the right part of the pitch.

"If they can keep Leicester in their own half, that will lessen the chance of giving away kickable penalties, which is especially important with a very good goal kicker in Toby Flood in the Leicester ranks."

Ulster are the only team in the competition to have won all their pool games to date, while Leicester's sole defeat came at Ravenhill in the opening round of matches at the start of October.

"Last week Montpellier shut Ulster down defensively for a long period and the inability of his side to break down that defensive line will be a slight worry for Mark Anscombe, even though it came eventually.

"Also it's important that if Ulster get on top, they stay on top. What they have consistently done this season is after they have scored, they've taken their foot off the gas and let their opponents back into it.

"Really high quality, good teams will put the throat on the foot and not give the opposition an opportunity to come back at them.

"The bonus point system was introduced primarily to meet the demands of television, which craved wide expansive rugby and high scoring games, but thankfully bonus points are now an irrelevance.

"Every match is like a knockout one for Ulster from this point on and they just have to go there, execute their gameplan and win," concluded McWhirter.