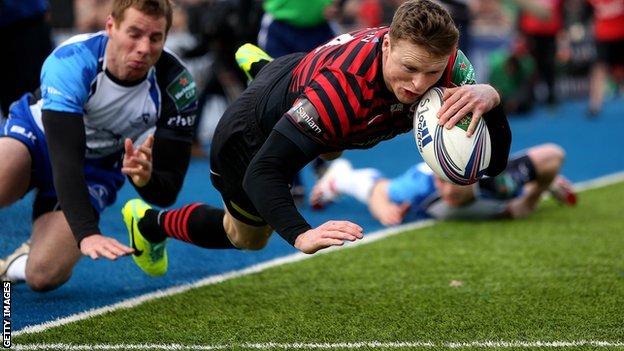 Saracens scored 11 tries as they thrashed Connacht to secure second place in Pool Three and squeeze into the Heineken Cup quarter-finals.

Chris Ashton and David Strettle crossed for the hosts as they took a 13-6 lead.

Schalk Brits added their third before Strettle completed his double.

The Heineken Cup last eight is made up of the six pool winners and the two best runners-up, and the bonus point means Sarries are currently the best of the two second-placed sides, although Leicester and Ulster meet later on Saturday to decide the top two in Pool Five.

The key to Sarries' win was the power of their pack, especially with ball in hand, and the visitors - bottom of the Pro12 - found themselves increasingly unable to front up to the Premiership leaders the longer the game went on.

The rampaging Vunipola brothers were outstanding at getting Sarries on the front foot and Brits and Goode were in devastating form wider out - and with plenty of quick ball Charlie Hodgson, playing 10 in place of rested England fly-half Owen Farrell, was excellent as the playmaker.

At 33, the former England fly-half is now a veteran - albeit two years younger than opposite number Dan Parks - but his running game was too sharp for the visitors and his passing time and again released the pacy players out wide.

The only part of his game that misfired was his goal-kicking - only four attempts out of 10 found the target while three more hitting the woodwork - but Sarries were in such control it made little difference.

The lead was exchanged a couple of times early on as Parks knocked over penalties either side of Ashton's try, which was a beauty.

Billy Vunipola made the initial ground before brother Mako rampaged 20 metres from Hodgson's crisp inside pass, and when the ball was recycled another lovely Hodgson pass gave Ashton the chance to fly down a one-metre channel on the right wing and dive over in the corner.

Hodgson missed the conversion but soon slotted over a simple penalty to give Sarries a lead they never relinquished.

Strettle profited from a generous Duncan Taylor pass - the Scotland centre was nearly over the line himself - after fine work from Goode and Hodgson to score Saracens' second.

Any chance Connacht had disappeared when loose-head Nathan White followed up some reckless footwork on the body of Brad Barritt with a glancing stamp to the cheek of the England centre, and was lucky to escape with a yellow card.

And with the visitors down to 14 men, Brits burrowed over from an attacking line-out before Strettle scored his second after another incisive break from Goode.

The tries came either side of the break with Strettle's, a minute after the restart, making it 23-6 and securing the bonus point.

Goode then claimed a glorious solo score, taking the ball on halfway on the left wing and dummying and gliding his way through a feeble Connacht defence to score in the right-wing corner, and the Londoners showed no mercy as they put Connacht to the sword.

Kruis, Wyles, Wray and Johnston scored within 14 minutes - before England wingers past and present, Strettle and Ashton, rounded things off in style.

Saracens boss Mark McCall: "There were some outstanding individual performances. Alex Goode has been very good over the past two months but today he was unbelievable as he looks much quicker.

"Strettle is playing as well as ever and Ashton's finish for his first try was something special.

"We are not a top two or three European side but we are a top eight team. We can step up and learn from defeats at Clermont and Toulouse and can win away,"