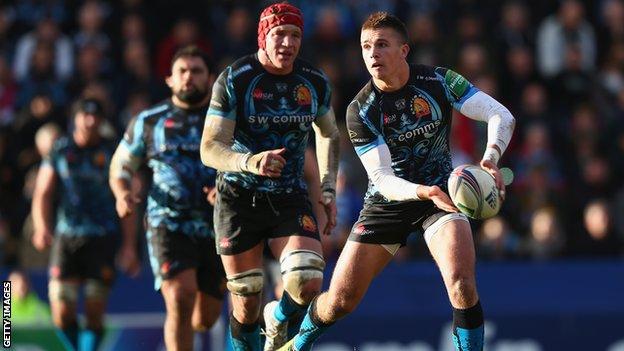 But unlike 99.9% of them, Slade - the up-and-coming Exeter Chiefs fly-half who has just been picked for the England Saxons squad - got to face the national team's all-time record points scorer and hero of the 2003 World Cup triumph on the pitch.

We're all competitive guys but there's no animosity between anyone

"Playing against him was probably the highlight of my career so far, it was just a dream come true," Slade told BBC South West Sport.

"I've watched him for so many years. I was 10 when England won the World Cup and I can remember sitting in the rugby club under the table and cheering.

"Unfortunately for [Exeter fly-half] Gareth Steenson, he got injured in the first game and came off after 20 minutes so I had a good bit of time. I was just really pleased to get on and play that much."

Slade took the chance to go into the Toulon dressing room after the match for a chat with the England great, subsequently posting a "selfie" of himself and Wilkinson on Twitter.

"We had a bit of a chat about how he found Exeter to play against and he was really complimentary about the team and how we'd played," said Slade, who went on to start the rematch the following week.

"You watch these players on TV all the time when you're a kid and when you actually come against them it's a bit surreal. When I was watching them from the bench, you sit there and think 'Oh my God, we're playing against these guys' but when you get on it's like any other match.

"You forget about who you're playing - obviously they're good players but you play against good players every week."

Slade has a World Cup winner's medal of his own, having been a key part of England Under-20's victory in the junior tournament last summer, alongside fellow Chiefs academy graduates Jack Nowell, Sam Hill and Luke Cowan-Dickie.

"It was completely different but a hell of an experience," said Slade. "You're away for a month or so and living with the same boys and playing every four to five days so it's tough but you learn a lot."

This season has been a real breakthrough for Slade, who is vying with the experienced Steenson and Ceri Sweeney for the number 10 jersey, and he is relishing the fight.

"I've been involved every week and I'm getting some good gametime, initially it was off the bench and now I've started the last couple of games," said Slade, who made his first Premiership start against Wasps earlier this month.

"It's been really good for me to get that experience because that's probably the main thing at 10, when you get a consistent run of games everything becomes more natural and just easier.

Slade said the way Chiefs head coach Rob Baxter has sensibly developed the club's talented group of youngsters has been a significant factor in his progression to the first team set-up.

"We've had our time in the academy and going out on loan," said Slade, who spent time playing for Championship side Plymouth Albion last season.

"We've come back and we're involved in the first team now. It's been good for us for it to have taken this long, but now it's here it's great that we're all getting a shot and hopefully proving ourselves with our performances.

"The way they've pulled me through has been gradual but at the right pace and that's helped so much in terms of not being thrown in so much at the deep end."

For his part, Baxter said Slade had been promoted to the first team on merit, not as part of a desire to blood youngsters.

"We've always said to our young players that we'll pick them when we feel they deserve to play," Baxter explained.

"People talk about giving young players opportunities but Premiership rugby isn't really about that - it's about training well, playing well and taking your opportunities when they come to earn the right to get the starting jersey.

"He's got some things to learn but that comes with experience. We want him to get better and he will be better - the more he plays the better he gets.

"It's going to be a real dogfight to see who comes out the other side as the number one and I'm certainly not expecting Gareth or Ceri to lie down and Henry to take over."