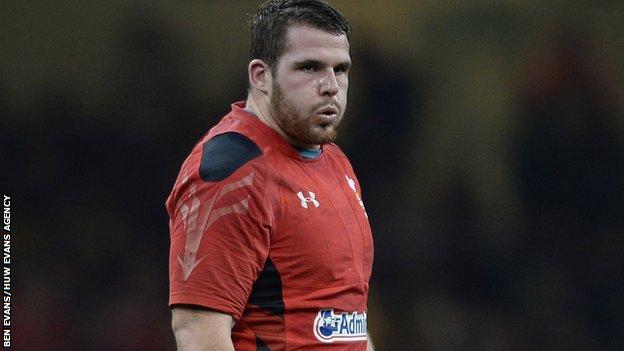 Loose-head Bevington has been named in Wales' 32-man squad along with Bath prop Paul James.

So far Bevington, 25, has only made two Wales starts in his 12 caps.

"Gethin's obviously picked up a niggle. I don't know how bad he is and you have to take every opportunity as it comes," said Bevington.

Jenkins, who has 101 caps, has been named in the squad by coach Warren Gatland despite injury concerns which saw him have a knee scan on Monday.

The 33-year-old prop had the scan after he was injured in Cardiff Blues' 43-20 Heineken Cup defeat by Toulon.

But Bevington, who came off the replacements bench during the autumn internationals in 2013 against Australia and Tonga, is ready to step up to the starting XV.

"He [Jenkins] has got a big pair of shoes to fill. That's the best way to describe it. He is a great player and a great guy as well. It is one of those hard things to step into," Bevington admitted.

"Obviously he has made a great impression and so it's something you have to challenge."

"[But] as a lot of players say: 'That jersey's never yours.' You are just passing by as you get the chance to wear it and try to make a mark when you wear it."

Jenkins is not Gatland's only injury concern as he prepares for the Six Nations opener against Italy on 1 February at the Millennium Stadium.

He has also included Sam Warburton, who continues as captain and is expected to return "in a couple of weeks" from his shoulder injury.

Wales will be without Lions centre Jonathan Davies for most of the tournament because of a shoulder injury but he also figures in the squad.