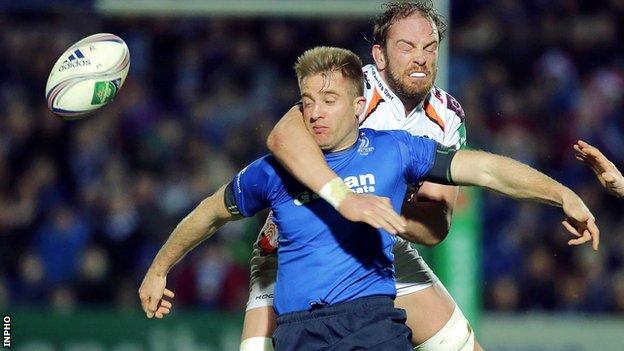 Three-time winners Leinster reached the Heineken Cup quarter-finals as Pool One winners after a bonus-point win over the Ospreys in Dublin.

Ospreys lock Ian Evans was red-carded for an alleged stamp on 20 minutes with the game level at 3-3.

Leinster took control and a penalty try was followed by Cian Healy's touchdown as the hosts led 17-3 at the break.

A second penalty try was awarded before tries from Jordi Murphy and Isaac Boss completed a comfortable victory.

The Ospreys defended stoutly throughout and repelled two early Leinster attacks before the hosts finally got on the scoreboard with a Jimmy Gopperth penalty after nine minutes.

But an evenly balanced game tilted decisively towards Leinster with the dismissal of Wales lock Evans, who could now be suspended for the Six Nations.

He was red-carded after Mike McCarthy was stamped on in a ruck, referee Romain Poite making his decision after numerous replays and consultation with the television match official.

The Ospreys had lost Ben John to injury early in the game, and they were forced to make a second change when Lloyd Peers replaced Ryan Jones.

Leinster made their numerical advantage count on 33 minutes, a driving maul collapsed by the Ospreys close to the line and Poite awarding a penalty try, which Gopperth converted.

The New Zealander went over himself two minutes later but touched down on an Ospreys foot instead of the turf to miss out on a try.

Prop Healy made no mistake two minutes before the break, though, darting over from close range before Gopperth added the extras.

Dave Kearney finished off a flowing Leinster move on 50 minutes but replays showed he had knocked forward and the try was disallowed.

Scrums became uncontested for a period when Ospreys hookers Richard Hibbard and Scott Baldwin were both off the field injured.

And Leinster were awarded a second penalty try on 62 minutes when Rhys Webb came in from the side to deny Jamie Heaslip a certain touchdown from a scrum.

Leinster hooker Richardt Strauss was cheered onto the field four minutes later as he made his first appearance since having heart surgery in October.

And Murphy barged over for the converted bonus-point try after 72 minutes, quickly followed by Boss sprinting in for the fifth three minutes later, though Gopperth missed the conversion.

"We were chasing our tail from the word go, if the truth be told, albeit at three-all we were hanging in there.

"[We were] scrambling in defence, making line breaks and having a couple of good moments.

"But then injuries caught up with us as well as having to play with 14 men and the lack of set-piece as the game went on.

"Everything that could go wrong did, in some ways."