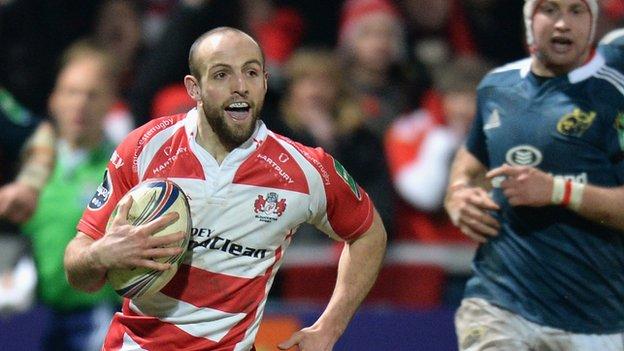 Gloucester's Charlie Sharples believes he will need more than a burst of try-scoring form to earn an England recall.

The 24-year-old was left out of all of Stuart Lancaster's squads last week.

And Sharples, who earned the last of his four England caps against Australia in 2012, thinks Gloucester's struggles this term have affected his chances.

"I've got belief in myself that I can be in that mix, but you have to be in form as a player and be doing that for a team that's in form," he said.

Charlie Sharples made his first England start against France in March 2012. He followed that up with two tries against Fiji at Twickenham in November the same year.

However, Sharples heaped praise on fellow Cherry and Whites wing Jonny May, who was one of four team-mates named in Lancaster's 35-man elite performance squad ahead of the Six Nations.

"For me it has been more difficult, and I've probably not had some of the chances that he's had. It's been frustrating from the point of view that I've not been able to show what I'm capable of.

"It almost feels like your hands are tied as a winger when you go out there and don't get any opportunities to do much."

Sharples responded to his England exclusion with a superb try in Saturday's 20-7 Heineken Cup loss to Munster, sidestepping two opponents before beating the cover to race over near the posts.

Captain Billy Twelvetrees, one of the Gloucester players Lancaster has kept faith in, has urged the team to view to game as a "new starting point" for their season.

And Sharples believes all England hopefuls at Kingsholm will get a boost from that approach.

"If we start playing better as a team, then that will benefit everyone. - people like Freddie [Burns], Billy [Twelvetrees], Jonny [May], myself, Blobby [Ben Morgan] all those guys all in and around that England mix.

"If we are doing well as a team that gives us a platform to showcase what we can do and hopefully getting one up on our opposite numbers.

"We have had too many one step forward and two steps back moments this season," he added.