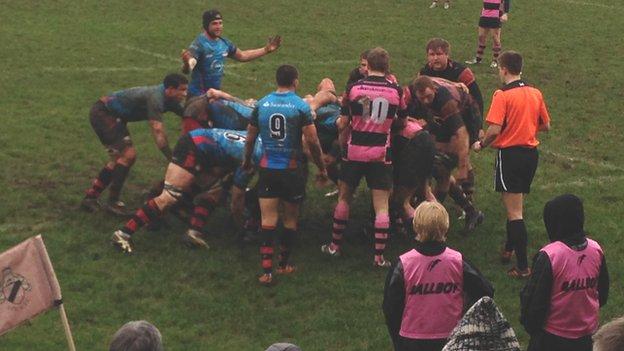 Jersey and Ayr's British and Irish Cup campaigns came to a close as the Scottish side claimed a 14-13 win.

Jersey took the lead thanks to a penalty try, with Ayr duo Scott Sutherland and Peter Jericevich sin-binned either side of the incident.

But Ayr were level at half-time thanks to Peter McCallum's converted try.

Two Grant Pointer penalties gave Jersey the advantage again but Ayr won it when full-back Grant Anderson went over in the corner and Finn Russell converted.

Both sides had struggled to play exciting, attacking rugby throughout in difficult conditions. The pitch was heavy and it rained through most of the 80 minutes.

Jersey's pack dominated early on and, with lock Sutherland shown yellow, they were rewarded with their penalty try. Scrum-half Jericevich joined his team-mate in the sin bin in the aftermath of the decision.

Just as it looked like that might be the only score of the first period, Ayr hauled themselves level with the final phase of the half. Back-rower McCallum powered over by the posts, leaving Russell with a straightforward kick to make it 7-7 at the break.

The visitors edged ahead with Pointer's two penalties - one of them after a superb driving maul. But Jersey could not turn that power into more tries and it was the Scottish side which finished the stronger.

Their second try came when the ball was worked along the line from left to right and Anderson had the space and speed to cross the whitewash. Russell's impressive conversion from out wide turned out to be the difference between the sides.

Despite the victory Ayr finish bottom of Pool Six, while the losing bonus point was not enough to lift Jersey above Ulster Ravens into second spot. Cornish Pirates, who had already guaranteed they would top the group before the final weekend of action, go through to the quarter-finals.