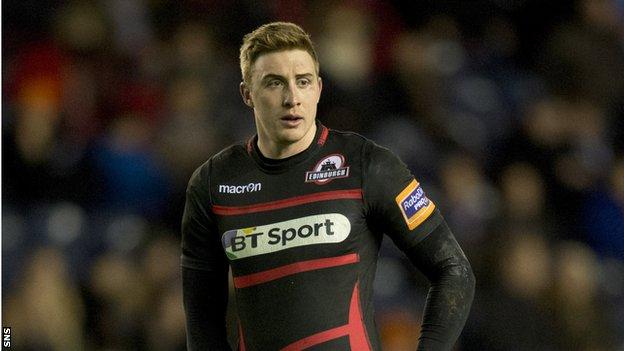 Edinburgh winger Dougie Fife is one of two uncapped players in Scotland's 36-man squad for the Six Nations campaign.

The squad contains 16 players from Glasgow Warriors, 11 from Edinburgh and nine who play in England and France.

While Fusaro has been involved in previous national squads, it is a first call-up for Fife, with Johnson saying he "deserves his selection".

"He's worked hard over the last 12 months, from being part of the A squad this time last year to becoming a first-choice selection at Edinburgh Rugby and a proven try scorer in the Rabo," said the coach.

"We do have competition in the back row and there are other players knocking on the door who may feature for the Scotland A team against England Saxons at the end of this month.

"Chris Fusaro had a terrific game in the Heineken Cup at the weekend and I've been impressed by just how explosive some of our back-row contenders have been in their club sides."

Johnson said his squad is for next week's training, which will take place primarily at the Heriot-Watt University campus on the outskirts of Edinburgh.

"We will announce an A squad next week for the match against England Saxons at Scotstoun at the end of the month," he said.

"As I see it, a number of players could yet force their way into the senior squad during the Six Nations."