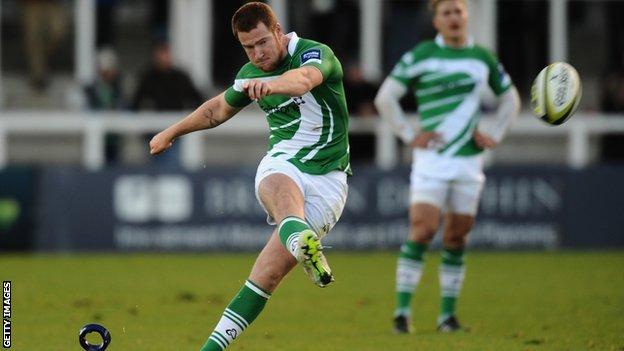 Newcastle's victory over Bucuresti proved in vain as Brive's win over Calvisano saw the Falcons bow out of the Challenge Cup at the pool stage.

The hosts dominated the first half and Ryan Shortland's score, combined with a penalty try and eight points from Rory Clegg, saw them lead the Romanians 18-0 at the break.

The win left them second in Pool Three.

Brive go through to the quarter-finals after the French side's routine 31-9 victory over Italian visitors Calvisano ensured top spot.

The Falcons did all they could however. Chris Pilgrim's clever quick tap set up Shortland for a second-minute try on the right-hand side and, although Clegg missed the conversion, he added two penalties as Newcastle opened up an 11-point lead.

After a long spell of pressure, the hosts were awarded a penalty try and Clegg's conversion ensured Newcastle's advantage was extended to 18 points by half-time.

Clegg took his tally to the night to 11 when he slotted over a penalty after the break, before Bucuresti were reduced to 14 men with a yellow card for Paula Kinikinilau.

A well-worked try for Catterick and Godman's conversion ensured Newcastle ended their Challenge Cup campaign with a victory.