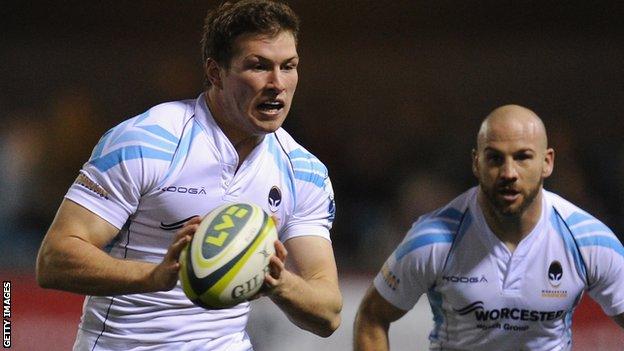 Worcester Warriors ended their Challenge Cup campaign with a first home win of the season against Oyonnax.

The visitors led at half-time thanks to Salim Tebani's try and penalty from Jonathan Bousquet, with Ignacio Mieres converting a penalty try for Warriors.

In the second half, Mieres slotted two penalties and added the extras to replacement wing Max Stelling's try.

Bousquet set up a nervous last few minutes when he scored an unconverted try, but the Warriors held on.

It was Worcester's first victory in this season's European competition but was not enough to lift them off the bottom of Pool One.

Warriors looked like they may be in for another disappointing afternoon when visiting hooker Tebani opened the scoring as he squeezed over in the corner.

But the Warriors were awarded a penalty try for Oyonnax illegally pulling down a maul and in the second half the home side stretched their lead through Mieres's boot before Stelling raced clear.

Despite a late French try, the Warriors were able to claim their first win at Sixways in all competitions since March.